Within the new project, team of the Association UMDPL and Real Stories Production studio started development of a virtual legal city Pravopil. Everyone, who is interested in receiving knowledge about the order and legal regulations of activity of state authorities, is invited to take part in a virtual excursion around the first object of the newly created virtual city portal – Police Unit. Portal «Pravopil» will become a universal, user-friendly and always topical resource with information on how public authorities should function with observance of minimal human rights standards. 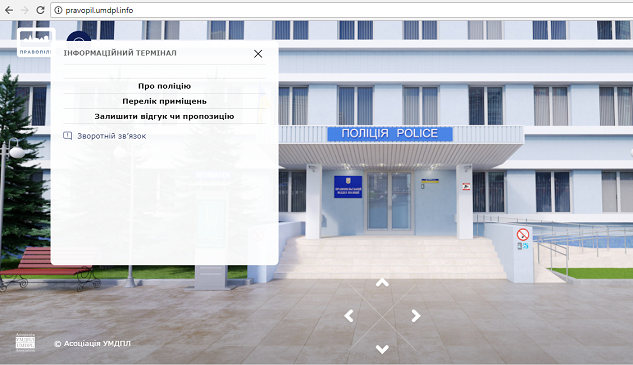 The portal visualizes premises of a state authority, its equipment, working schedule, rules for service documentation with simultaneous text explanations and references to provisions of relevant regulatory acts. Read more 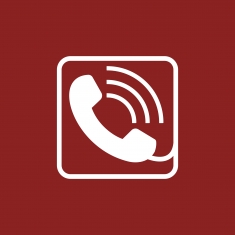 On 1 April 2018 Human rights center «Postup» and Association UMDPL with support of the US National Endowment for Democracy in Ukraine launched a 24/7 hotline to record human rights violations by law enforcement structures in the zone of United Forces Operation.

Our goal is to decrease the number of human rights violations by law enforcement officers in Luhansk and Donetsk regions by creation of a system of civil control and response to the facts of violations and activation of citizens for joint actions to protect their own rights and interests. Read more

Teenagers received knowledge as an instrument but not ready-made answers 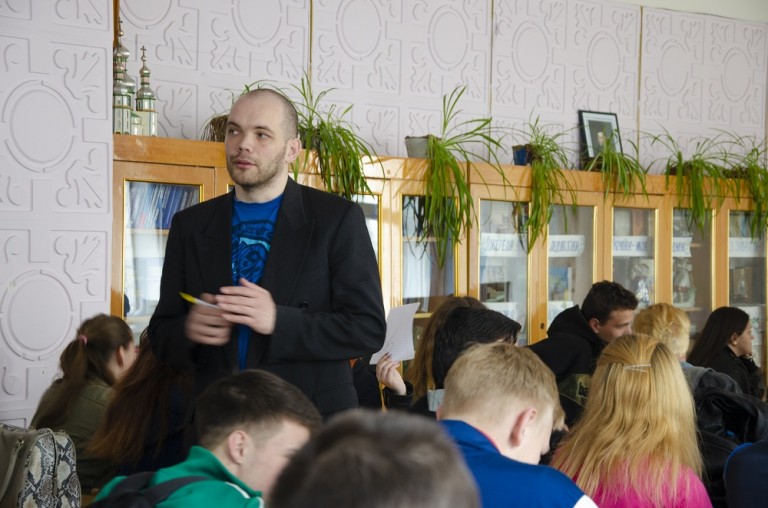 On 17-18 April representatives of the Association UMDPL Serhiy Pernikoza and Olexander Fedoruk together with Sergiy Bezpalchuk, Head of Public Relations Unit of the Department of Patrol Police of Kyiv city, held informational meetings with teenagers about their rights and work in law enforcement. Events were held in Engineering and Management College of the National Aviation University and Kyiv College of Construction, Architecture and Design. Read more

Altogether during the quarter there were 14 trainings for teenagers held on basics of communications with police using the cartoon «You and Police», among them 3 – in Kyiv region, others – around Ukraine.

On 10 May a teacher of jurisprudence Taisia Usevych and a human rights activist Yuriy Chumak organized a tour-lesson to Chuhuiv Police Unit for freshmen of Kochetotsk Secondary High Boarding School of Kharkiv region. Pupils spoke with officers of juvenile justice, got acquainted with tools and special police equipment, visited temporary holding facility, saw police cars and learned from a criminal expert about interesting moments in collecting evidence in criminal cases. Read more 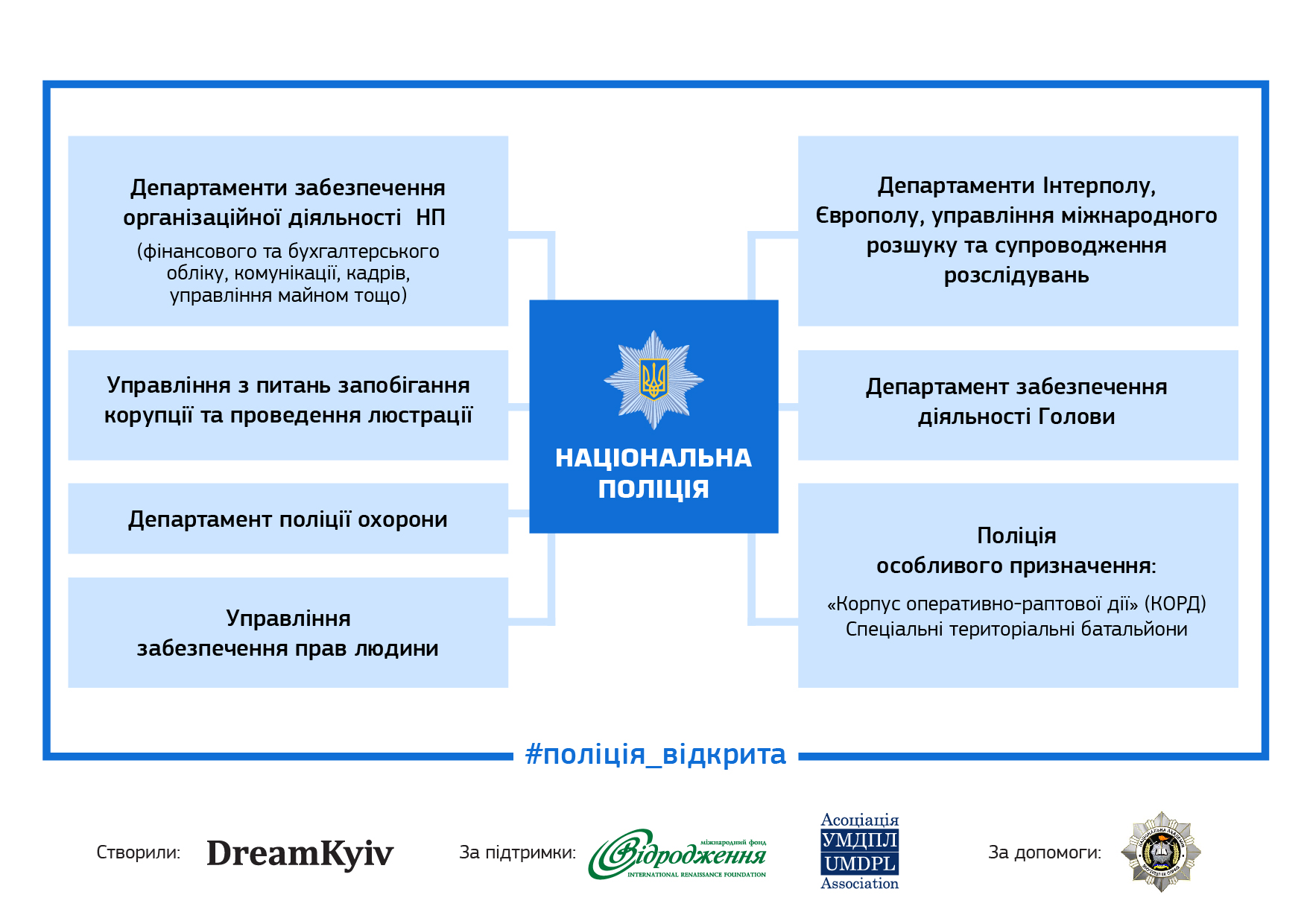 In order to understand the work of different police departments and units, DreamKyiv with support of the International Renaissance Foundation initiated a new media project #open_police. Association UMDPL was engaged to creation of a first publication which in itself is kind of a map of the National Police. Read more and see infographics 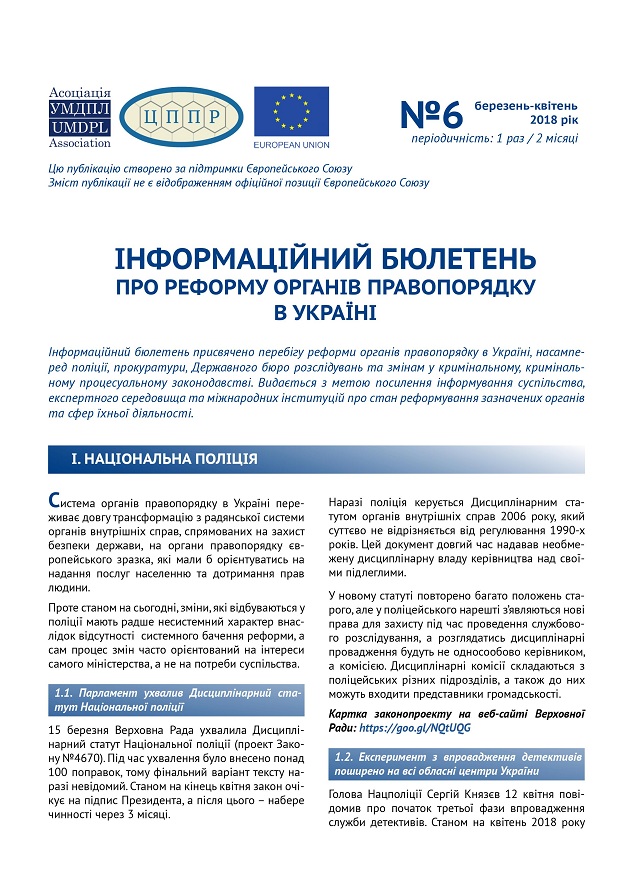 Informational bulletin is dedicated to the process of reform of law enforcement authorities in Ukraine, first of all of police, prosecution authorities, State Bureau of Investigations and amendments to criminal, criminal procedure legislation. It is published with the aim to better inform the society, expert community and international institutions on the state of reforming mentioned authorities and spheres of their activity. Download in Ukrainian language (UKR)

On 4 June experts of Association UMDPL took part in the work of a round-table organized by Council of Europe dedicated to tortures in police. Read more 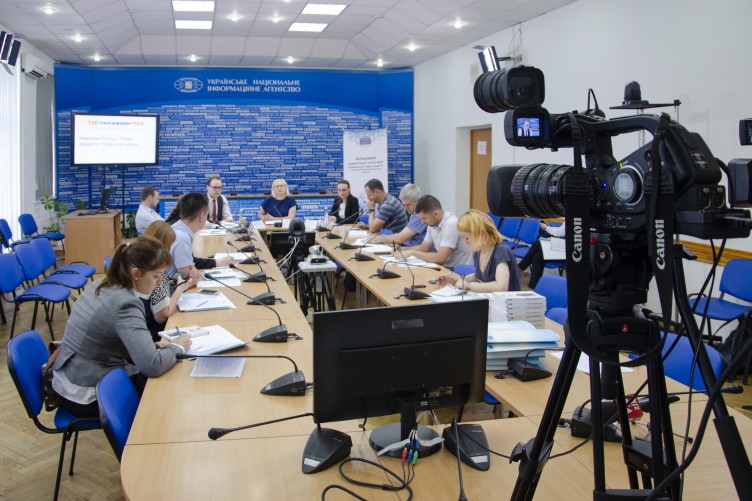 On 27 June Association UMDPL presented the analytical report «Human Rights and Police – 2017» – annual review of the state of human rights observance in the activity of police which includes a general overview of systemic problems and possible ways to overcome them.

This year the main focus of publication was put on the analysis of human rights observance in those blocks of police activity which today are in the focus of public attention – criminal, public security and informational. Read more

A video recording from the presentation of UKRINFORM can be seen by the following link.

Comments of experts regarding the police reform:

On 24 April experts of the Association UMDPL Mykhailo Kamenev and Eugene Krapyvin took part in a round-table of the parliamentary Committee on Human Rights, National Minorities and Interethnic Relations. They discussed the draft law aimed at «harmonization of criminal legislation with provisions of international law». Read more

Criminal misdemeanors: panacea for minor crimes or limitation of rights?

Eugene Krapyvin in his blog on LB.ua explains what exactly will be called a criminal misdemeanor and why such a novelty is needed (according to the adopted in the first reading draft law №7279d). Read more 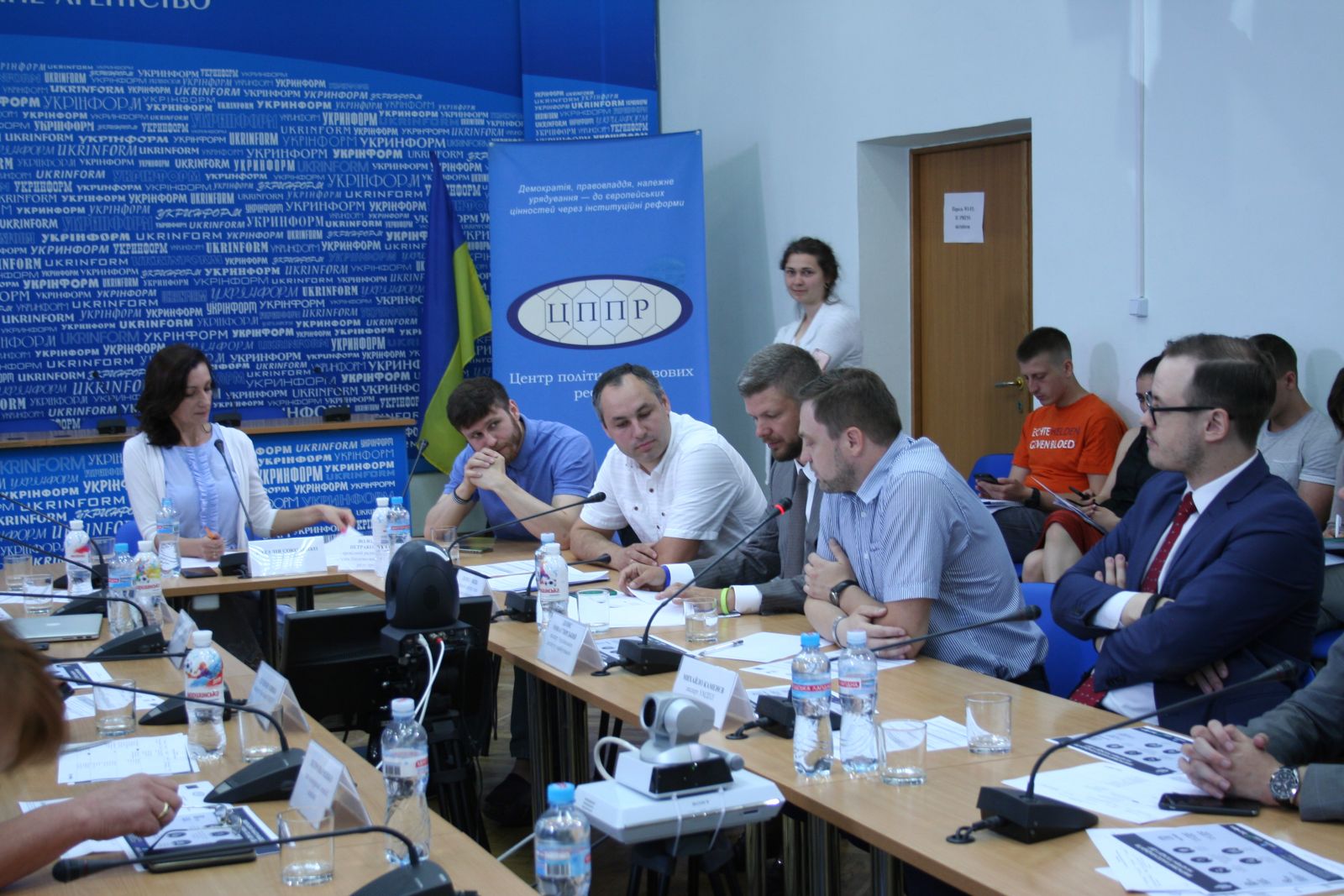 On 29 May during the round-table on «State Bureau of Investigations: perspectives of formation in 2018» Center of Policy and Legal Reforms, StateWatch and Association UMDPL presented main prospective amendments to the legislation regulating activity of the State Bureau of Investigations. Experts also told about the results of prior analysis of candidates to leadership positions of the Bureau. Read more

In the program VazhlyvoPRO of Chornomorsk Television and Radio Broadcasting Company Eugene Krapyvin spoke about the process of creation of the State Bureau of Investigations and changes that need to be introduced for this authority to start working effectively already this year. Watch a video

Eugene Krapyvin took part in the press breakfast «Reform of tax police: who will come as a replacement?» 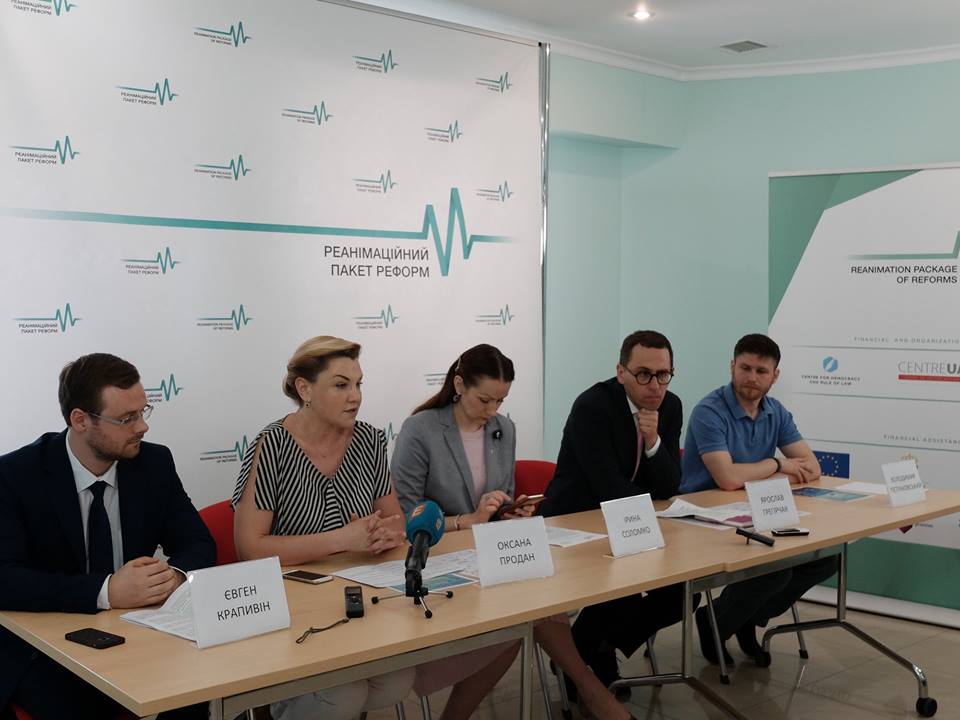 On 11 May expert of the Association UMDPL Eugene Krapyvin together with other speakers answered questions of journalists regarding tax police, National Bureau of Finance Security, Service of Financial Investigations, Financial Police and other bodies within the reform of financial investigations system. Read more and watch a video recording of a press breakfast.

It was also in his blog on LB.ua where the expert wrote about which of three draft laws on the National Bureau of Financial Security the Ukrainian parliament should choose. Read more

Other comments of the expert regarding the National Bureau of Financial Security: on UA-TV: watch in Russian and English; Blog on the portal “Slovo i Dilo” ; In the program of Chornomorsk Television and Radio Broadcasting Company; on the website of Association UMDPL.

Eugene Krapyvin in the studio of UA:Pershiy told about the widespread practice of lynching, types of crimes people most often report to police about, “civil detention” and problems of its application in Ukraine, systemic problems in police which make citizens look for illegal ways of assistance etc. Watch a video

Comments of Eugene Krapyvin regarding the work of police commissions:

Mykhailo Kamenev: Why does police hide its face? 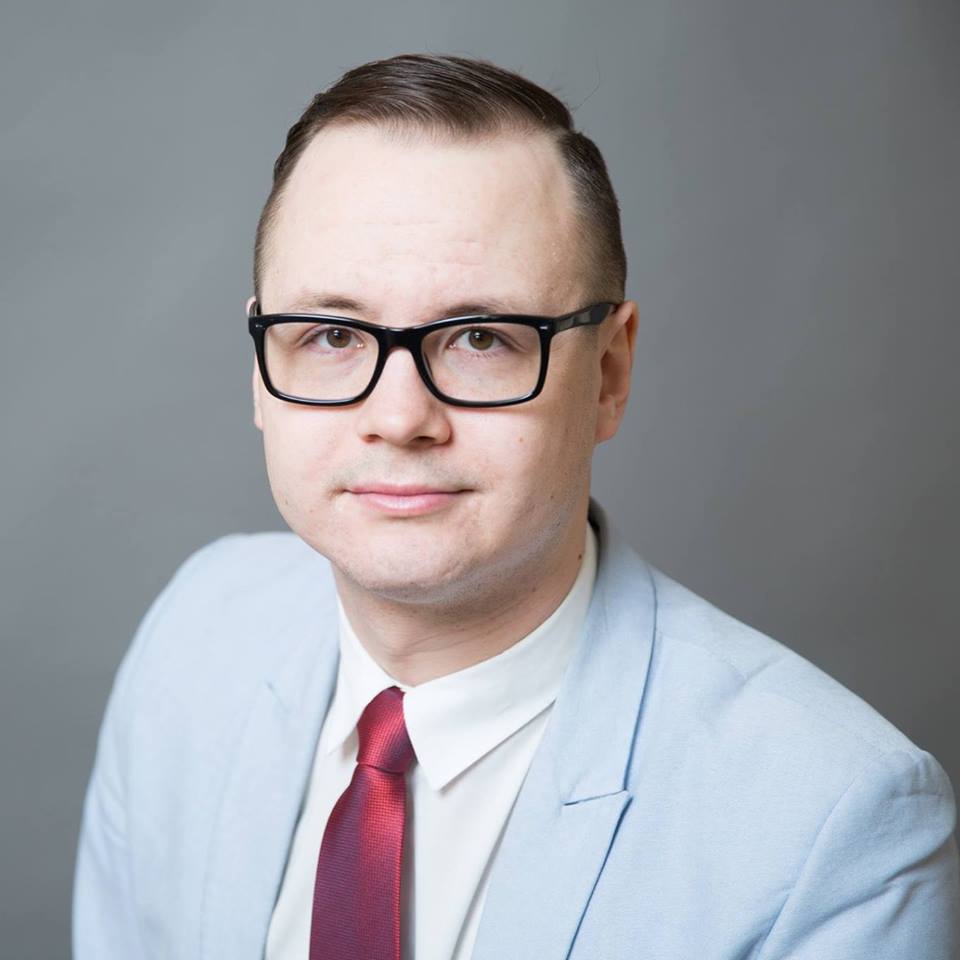 In his blog in “Ukrainian Pravda” expert of the Association UMDPL tells about the importance of personal identification of law enforcement officers, legislative changes concerning police badges and draft laws №5700 and №5701. Read more

Comments of Eugene Krapyvin on faking the murder of Arkadiy Babchenko. Watch a video

Comments of Eugene Krapyvin regarding the attack on Sergiy Sternenko and necessary defense. Read more

Eugene Krapyvin commented on the raids of ultra-right activists to detect drivers in Kyiv who use “Yandex.Taxi”.  Read more

Comments of Eugene Krapyvin regarding summons to military commissariats on the website of Information Center on Human Rights. Read more

“Kyiv has another day of traffic jams: what are the reasons and where to look for information about detours» – Interview of Mykhailo Kamenev to Hromadske radio.  Read more and listen to the recording

Eugene Krapyvin about tortures in police: in the studio of the TV channel «Kyiv». Watch a video

“Situation with tortures in police has not changed for the last 10 years» – Eugene Krapyvin in the studio of Hromadske radio. Read more and watch a video (in Russian)

Participation in the Fifth meeting of Parliament – Civil Society Platform

Expert of the Association UMDPL, a lawyer Mykhailo Kamenev was a moderator during the Fifth meeting of the Parliament – Civil Society Platform organized by EUAM Ukraine on civilian security sector reform.  Read more and watch a video of expert discussion

Eugene Krapyvin took part in a study visit to Romania where he met with authorities and civil society. Read more

Realities and prospects of development of Ukrainian prison

Before the premiere of a documentary movie «ПЖ» filmed by Real Stories Production studio we talked to the Head of Department of State Criminal Execution Service of Ukraine Olexiy Bondarenko about the realities and prospects of development of Ukrainian prison. Read more

Before the premiere of a documentary movie “ПЖ” a correspondent of Real Stories Production asked psychologist of Kyiv Pre-Trial Detention Center Vyacheslav Galkin about questions that criminals sentenced to life imprisonment ask and how hard it is to establish contact with them.  Read more (in Russian)

Life of people sentenced to life imprisonment: presentation of a documentary movie «ПЖ» in Kyiv 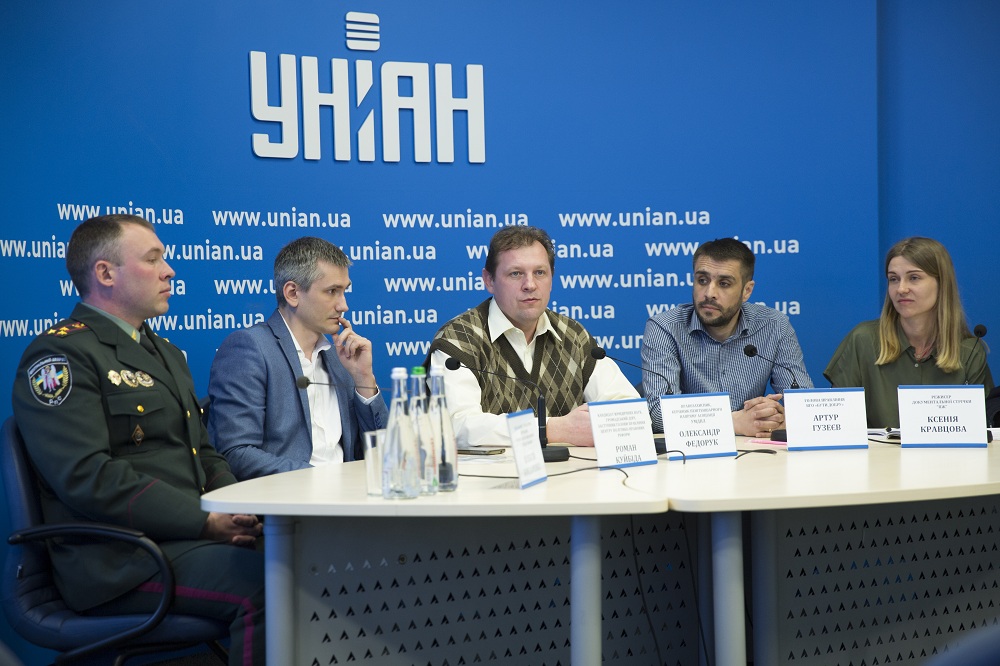 A documentary movie “ПЖ”, aimed to draw attention to problems of people sentenced to life imprisonment, was presented in Kyiv. Film shows the viewer an internal state of those people, tells about their feelings and psychological state. Read more

On 11 April in the studio of Hromadske radio – film director Kseniya Kravtsova and Olexander Fedoruk, a human rights activist, head of Penitentiary block of the Association UMDPL, spoke about the documentary movie “ПЖ” (life imprisonment). Read more and listen to an interview

Ukraine needs a law on legal status of convicted who served their sentences on the temporary occupied territories, – experts

Experts of the Association UMDPL Olexander Fedoruk and Olena Ostrovska took part in the XXI meeting of the working group of the Committee on Legislative Support of Law Enforcement and the Ministry of Justice on reform of penitentiary system. During the event participants discussed the draft law elaborated with participation of our experts «On Legal Status of Convicted Persons who Served Sentences on the Temporary Occupied Territories». The document defines the order of execution of measures on regulation of a legal status of persons who became hostages of a temporary occupation of Ukraine. More details on the draft law you can see on the website of our organization by the following link. You can also watch a video recording of the meeting.

Association UMDPL signed an open statement of human rights civil society organizations regarding the situation around roma community. You can get acquainted with the text of the statement by the following link.

Sergiy Baglai, analyst of the Expert and Analytical Block of the Association UMDPL, took part in the work of a round-table «Criteria of evaluation of effectiveness of police work in citizens’ human rights and freedoms observance» that took place in Mariupol with support of the International Committee of the Red Cross. Upon results of the meeting participants elaborated a reporting template which would allow to monitor the real state of human rights observance and increase effectiveness of their protection. Read more