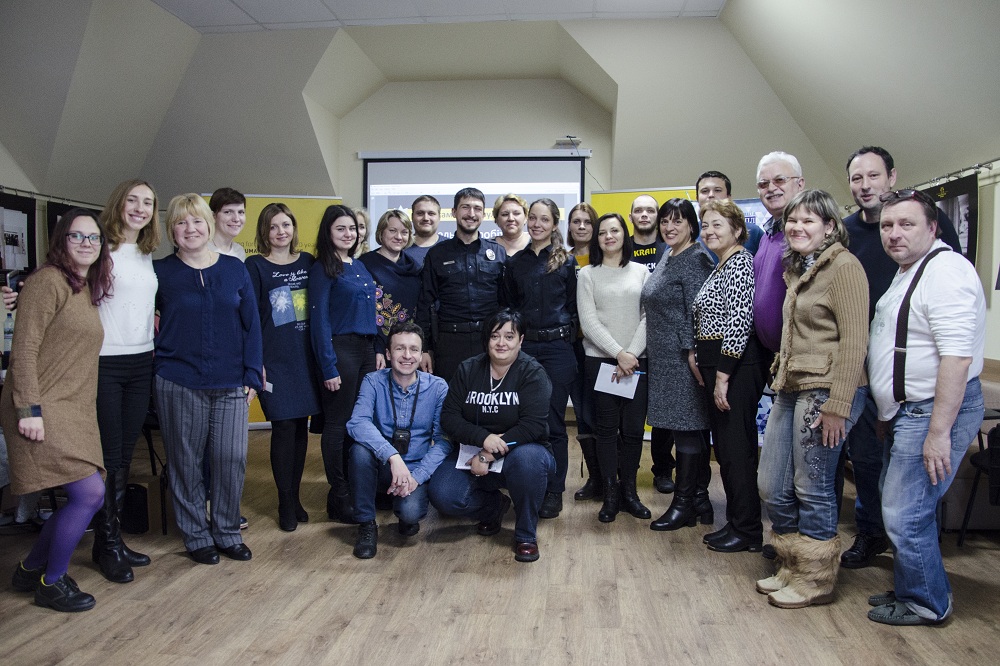 On 19-20 January in the Educational House of Human Rights in Chernihiv held was a training of trainers who would be telling teenagers about their rights, using a 7-episode animation movie «You and Police». Within the new project of the Association UMDPL, during February – May 2018 24 trainers will hold master-classes on the basics of communication with police for teenagers and persons representing vulnerable groups of population from all over Ukraine. Among participants of the event were regional coordinators on public relations of the Commissioner for Human Rights, workers of social services, practical psychologists and staff of legal aid bureaus from all over Ukraine. Read more. 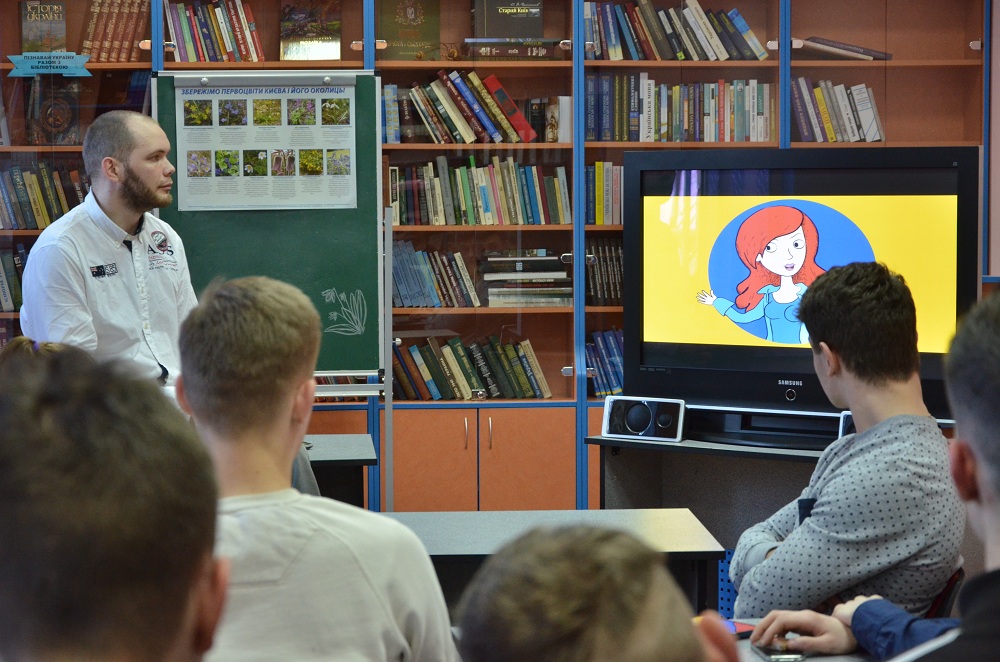 On 5 March in the premises of Kyiv City Specialized Youth Library «Moloda Gvardia», Serhiy Pernikoza held a master-class for minors in the conflict with the law on the basics of communication with police. During the meeting teenagers watched a 7-episode animation movie «You and Police» and could ask questions.

The event was organized within the framework of the project «Improving the level of legal education and capability to protect own rights when communicating with police» together with the representatives of the Unit of Juvenile Prevention. Read more

An online-course «Basics of communication with police» was presented 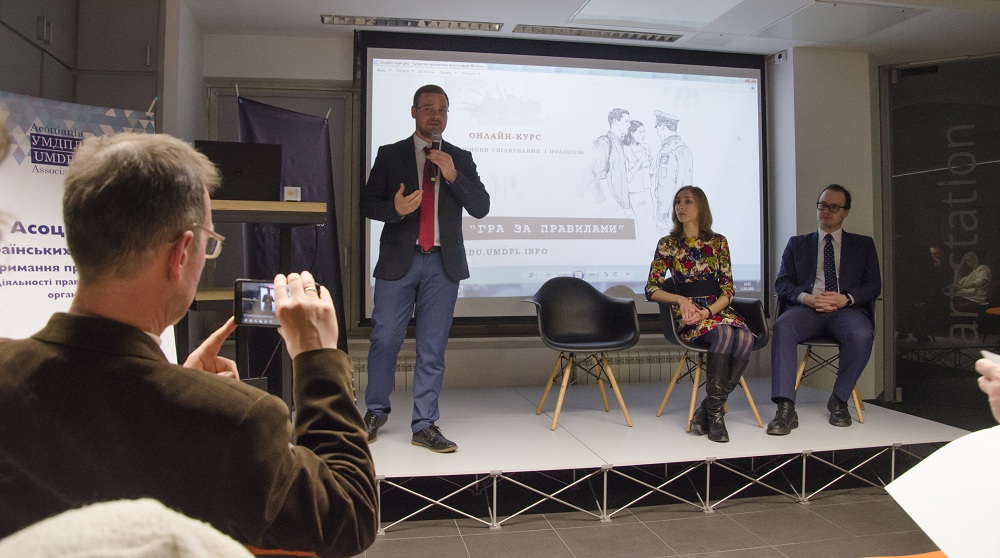 On 13 March there was a presentation of the online-course «Basics of Communication with Police» developed by the Association UMDPL and a Real Stories Production Studio – edu.umdpl.info. The course includes visual materials, excerpts from the legal acts of Ukraine, additional materials to each lecture and “test your knowledge” sections.

Materials were elaborated by academia and civil monitors who communicate with police almost every day. Read more 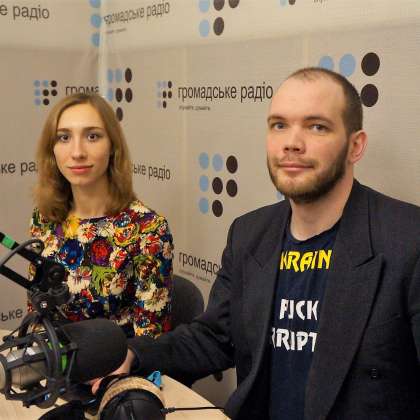 What do children have to know about communication with police?

Serhiy Pernikoza, trainer of the project «Improving the level of legal education and capability to protect own rights when communicating with police» of the Association UMDPL, talked about his experience in teaching children basics of communication on human rights during the program of Hromadske Radio. Read more and listen to the interview. 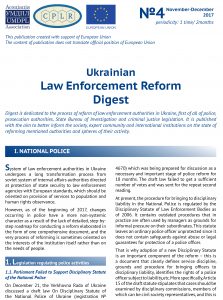 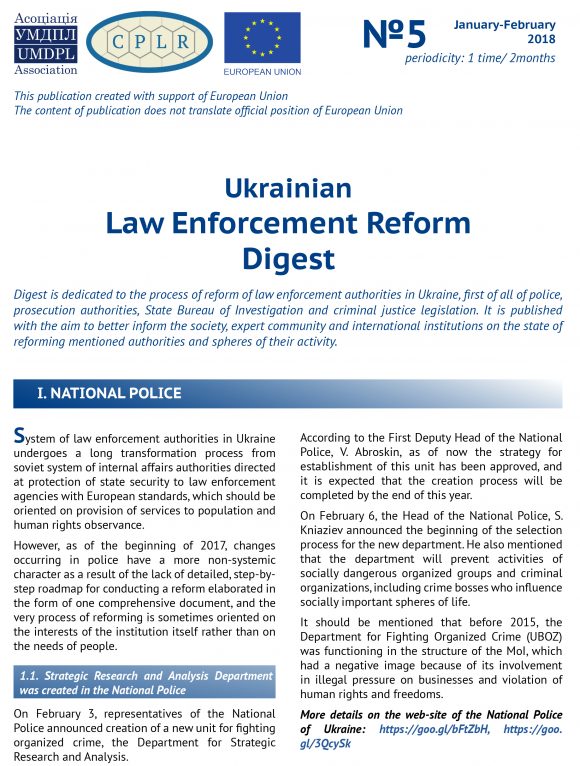 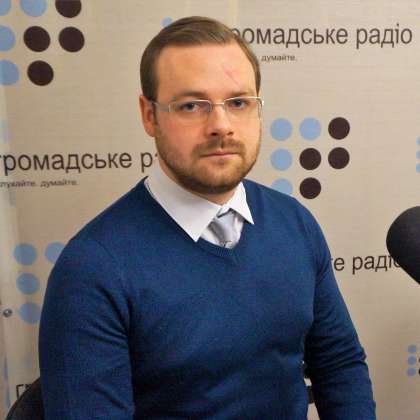 Final collegium of the Ministry of Internal Affairs of Ukraine: what indicated numbers show

On 28 January on air in the program of Hromadske radio Eugene Krapivin, a lawyer and expert of the group «Police under Control», analyzed annual report of the Ministry of Internal Affairs of Ukraine which was presented during the annual collegium of the Ministry. Read more and listen to the conversation.

Why do police have to release law breakers? Experts indicated disadvantages of reforms

Another commentary of Eugene Krapivin regarding staff issues in police you can find in the program of TV-Channel «Kyiv».

Creation of «National militia groups»: what is their mandate and is there a threat – commentary of Eugene Krapivin

On paper such groups are legal, in practice – they will abuse their mandate committing illegal actions. Lack of effective police control over them – is a problem that we may face. This is a short formula for the whole history of municipal guards, national militia groups and others as of today.  Read more.

According to the legislation, «National Militia Groups» do not have the right to check the documents, detain people or use force, however, can do so in practice. This was the information from the lawyer and expert of the group «Police under Control» Eugene Krapivin on his Facebook page. Read more

Soviet indicators or the level of population’s trust? – How to evaluate police

Police at the time has both the departmental evaluation system and a picture for the public. Ideally it has to be one system. This is what the article of the expert of Association UMDPL Eugene Krapivin for the issue of «Dzerkalo Tyzhnia» is dedicated to. Read more 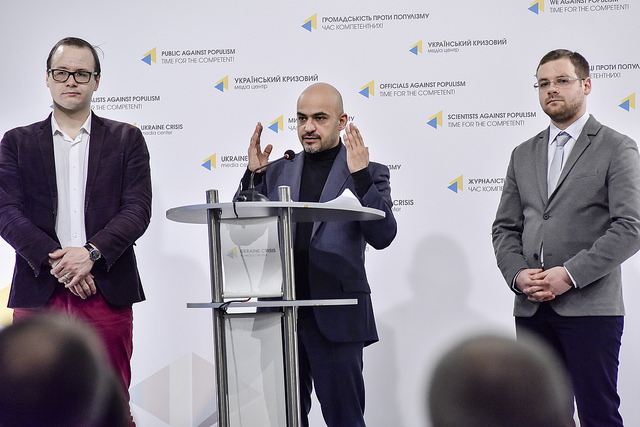 Effective identification of law enforcement officers will lower the level of impunity – authors of draft laws 5700, 5701

On 8 February during the press-conference presented were draft laws on the effective system of identification of law enforcement officers (register №5700, 5701) which are called to qualitatively change the existing standards of identification of law enforcement officers, and in such a way to lower the level of impunity among them. Read more and see the video from the press-conference.

You can also listen to the commentary of Eugene Krapivin regarding the identification of police officers in the program of Chornomorsk Television and Radio Broadcasting Company.

Eugene Krapivin, an expert of the Association UMDPL, told about reasons that hinder the identification of each uniformed police officer, as well as about 5 key changes foreseen by unobtrusive draft laws №5700 and 5701, to the Online Edition “Livyi Bereg”. Read more

Avakov against justice: from a shot at police officer to a shot at judicial power

Experts of Association UMDPL Eugene Krapivin and Mykhailo Kamenev gave a detailed commentary regarding professional mistakes and inappropriate public statements of police and the Ministry of Internal Affairs regarding clashes under the Solomyanskiy District Court of Kyiv where a preventive measure was being chosen for Gennadiy Trukhanov. Read more

“Witnesses on their knees” or another dispersal of a peaceful assembly

Eugene Krapivin, expert of the Association UMDPL, commented on the situation with dispersal of a peaceful assembly by the Minister of Internal Affairs for the Online-Edition «Livyi Bereg» and shared thoughts regarding police being a tool of political struggle. Read more

National Police had a court order to inspect the tent site, this did not mean its demolition, – lawyer about the attack near the Verkhovna Rada of Ukraine

In the studio of Hromadske radio Eugene Krapivin commented on the events of 3 March near the Verkhovna Rada of Ukraine. Read more and listen to the recording

“Amendments of Lozovyi» – result of political agreements but not of legal discussion, – Eugene Krapivin

On 23 March Eugene Krapivin, expert of the Association UMDPL, took part in a Round-table in the Gorshenin Institute, where its participants discussed legal and political consequences of amendments to the Criminal Procedure Code that came into force. Read more and watch a video

A round of agreements and promises: what will happen with «Lozovyi’s Amendments»?

Expert of Association UMDPL Eugene Krapivin in his blog on the Online-Edition «Livyi Bereg» told about changes that are to be expected after «Lozovyi’s amendments» are adopted by the Verkhovna Rada of Ukraine. Read more

On his Facebook page expert of the Association UMDPL Eugene Krapivin analyzed the Ruling of the Supreme Court №754/5978/16-к of 8 February 2018, which touches upon complex practical issues of application of the Law on the National Police and provisions of the Criminal Procedure Code of Ukraine. He also shared his thoughts about the legal position of the Supreme Court regarding the surface inspection and search. Read mor 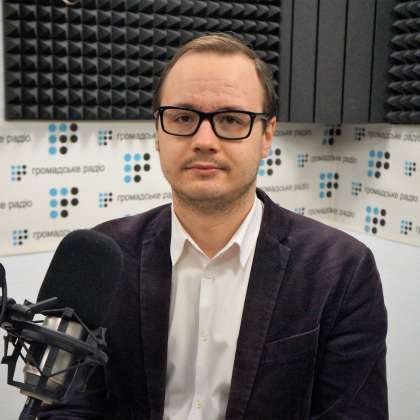 When a police officer works openly, he is more secure from himself, – human rights defender

Expert of the Association UMDPL Mykhailo Kamenev in the interview to Hromadske Radio explains why the topic of identification of police officers and officers of the National Guard is important and tells about two draft laws, one of which touches upon the National Police, and another – the National Guard. Read more and listen to the conversation.

With the new Ombudsman the level of neutrality of the Office built by Lutkovska can become worse, – human rights defender

In the program of Hromadske radio expert of Association UMDPL Mykhailo Kamenev comments on the appointment by the Verkhovna Rada of the candidate from the «People’s Front» Liudmila Denisova to the office of the Ukrainian Parliament Commissioner for Human Rights. Read more and listen to the recording

Expert of the Association UMDPL Mykhailo Kamenev took part in the work of the round-table dedicated to the constitutional appeal. Read the commentary and watch the video from the event

Eugene Krapivin about politics and its influence on the life of Ukrainian people in the studio of the program «To the point» on the TV-Channel  UA:Pershiy 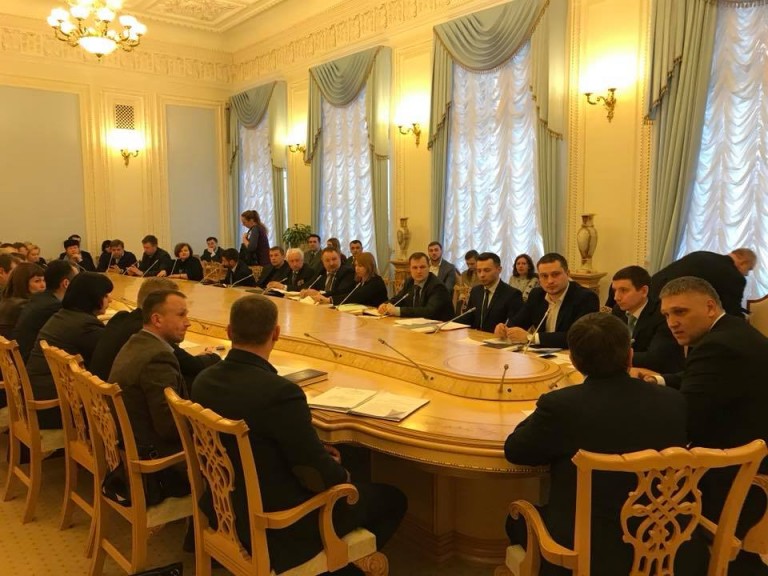 On 8 February Olexander Fedoruk, Head of the Penitentiary Program of the Association UMDPL, took part in the first meeting of the working group on reforming penitentiary system, during which the draft law «On Disciplinary Statute of Penitentiary System» was further elaborated, participants discussed the new draft law on legal status of convicted persons that was presented by the Ministry of Justice of Ukraine. Read more 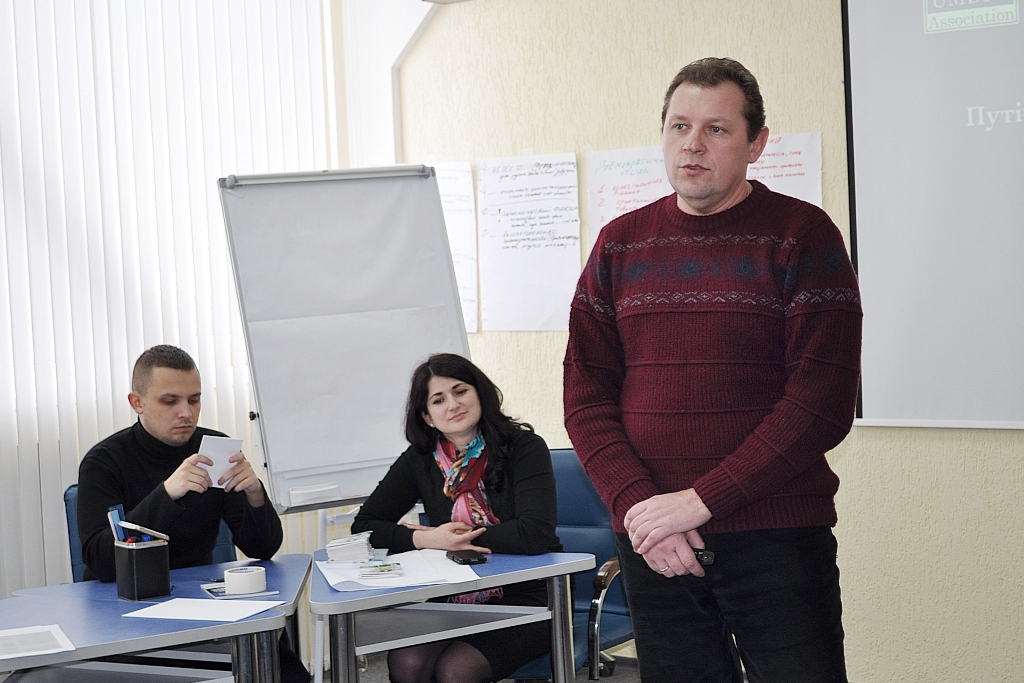 On 13 February representatives of the Association UMDPL Olexander Fedoruk and Olena Ostrovska conducted an informational training within the specialized course «Effective Penitentiary Management» for the leaders of the penitentiary institutions in Bila Tserkva Center of Qualification of Personnel of the State Criminal and Executive Service of Ukraine. 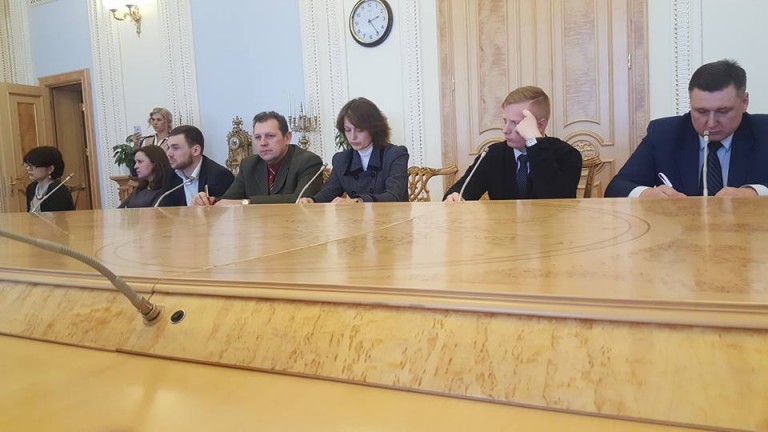 On 22 March during the 19th Joint Meeting of the Working Group of the Committee on Legislative Support of Law Enforcement of the Verkhovna Rada of Ukraine and the Ministry of Justice of Ukraine on reforming the penitentiary system, Kudlai Pavlo Olexandrovych, representative of the Ministry of Justice, presented the final version of the draft law «On the Legal Status of Convicted Persons who Served Sentences on the Temporarily Occupied Territories and Territories of Settlements where State Authorities of Ukraine Temporarily do not Exercise their Mandate, on the Territories of Settlements located on the Collision Line as well as on Territories of Aggressor State». Among other civil society organizations representatives of Association UMDPL Olexander Fedoruk and Olena Ostrovska also worked on the text of the draft law. Read more 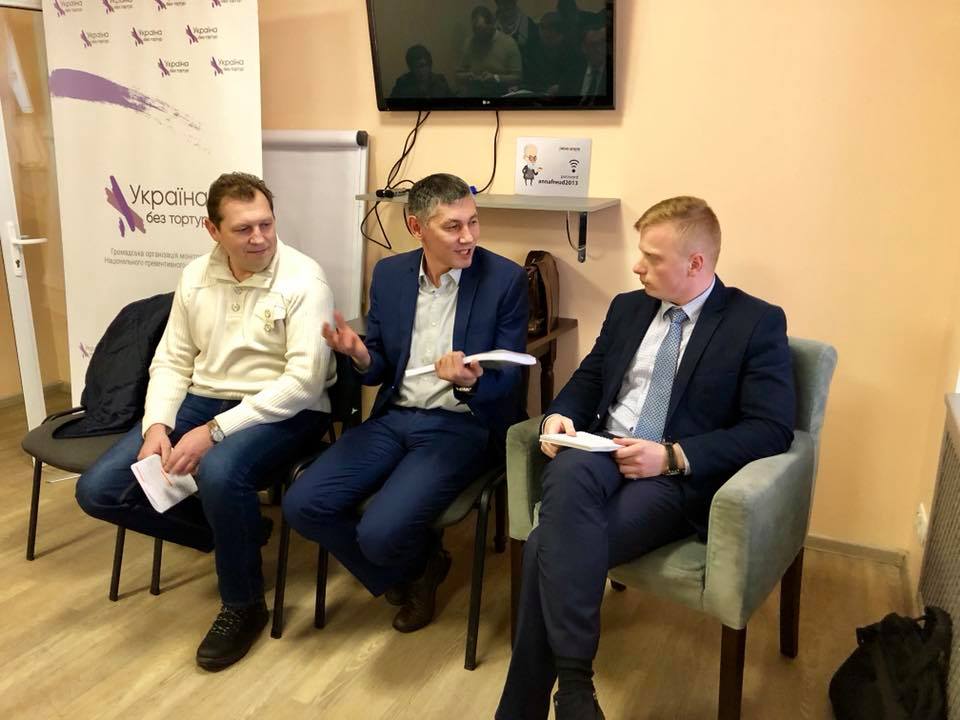 On 29 March Olexander Fedoruk, Head of Penitentiary Program of the Association UMDPL, was a speaker during the discussion «Limitation of the rights of prisoners. Novelties of internal order», organized by the NGO «Ukraine without Tortures». In his speech he made a short evaluation of Rules of Internal Order of penitentiary institutions, told about the essence and goal of the document. 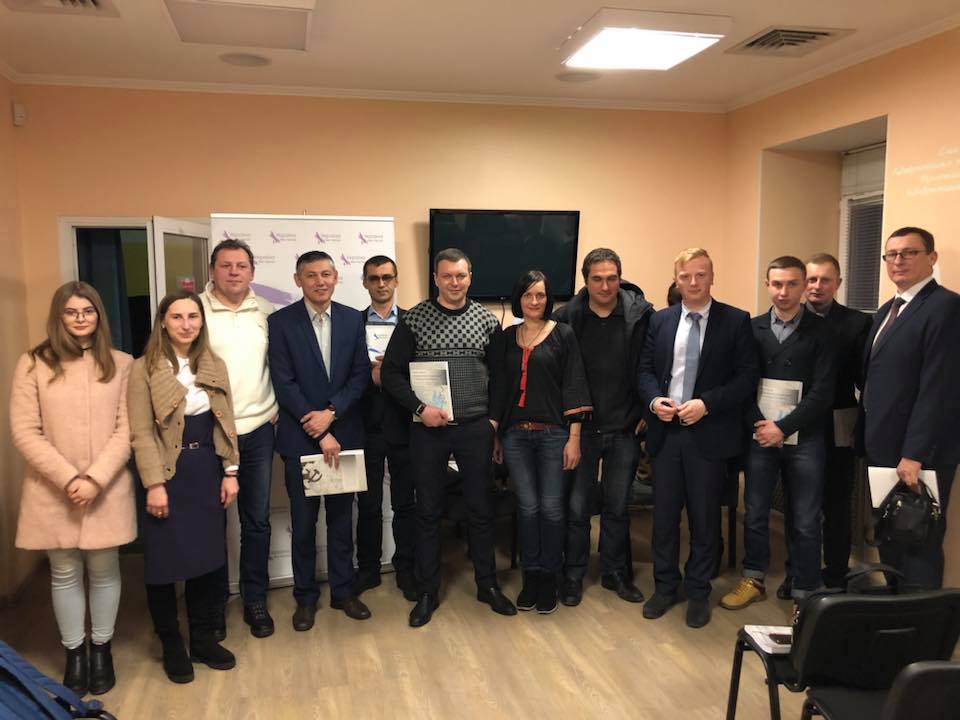 He also mentioned that Rules have to include clear norms that have to answer the questions on «how to implement measures foreseen by Internal Order for convicted persons? ». In particular, according to the expert, it is necessary to clearly differentiate measures foreseen by day plan, regime of detention, order of application of security measures etc. It is also makes sense to eliminate illogical prohibitions for convicted (keeping colored pencils, copy paper etc.), shorten by explanation a number of reference norms and their equivocal wording. Read more

Association UMDPL joined the open appeal with the following statements: Prosecutor General shall ensure conducting quick and effective investigation of events of 3 March 2018 near the Verkhovna Rada of Ukraine; Verkhovna Rada of Ukraine shall promptly consider draft laws related to improvement of the legislation regarding the identification of police officers and military men of the National Guard of Ukraine; Cabinet of Ministers of Ukraine shall adopt regulatory acts regarding actions of law enforcement officers and other services in order to ensure public security during mass events. Read more 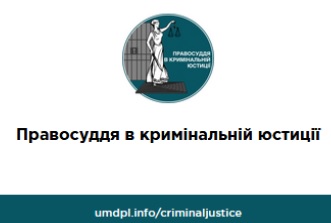 The aim of the program is to promote the realization by citizens of the right to judicial protection of their rights and freedoms in criminal proceedings, strengthen judicial control over observance of these rights and freedoms, facilitate administration of justice in criminal proceedings based on the rule of law and observance of the right of each to fair trial. This program will be implemented by monitoring the observance of rights and freedoms of parties of criminal proceedings in court, conducting analysis and formulation of conclusions regarding the state of administration by citizens of their right to judicial protection; conducting educational events on increase of legal awareness of citizens regarding the possibility of judicial protection of their rights and freedoms in criminal proceedings; expert evaluation of draft laws related to reforming of law enforcement and judicial bodies, administration of fair trial and justice; establishing and conducting constant communication with state authorities and bodies of judicial self-governance regarding implementation of rule of law in practice according to the international standards. Page of the program can be seen by the following link on the website of Association UMDPL.