Welcome to the migration service of «Pravopil» – a virtual legal city

A team of the Association UMDPL has recently held a working meeting-presentation of the model of the State Migration Service in the virtual city of «Pravopil».

Expert and member of the Association UMDPL Volodymyr Batchaev presented the new object of «Pravopil». The portal shows the premises of the state authority, their equipment, working schedule, rules for processing service documents together with textual explanations and references to relevant regulatory and legal acts. Read more

Within 10 months in 24 regions of Ukraine held were master-classes for youth on how to prevent violations of their rights by police officers.

Such trainings became possible by engaging regional trainers within the project «Raising the level of legal education and improving capacities to protect one’s rights when communicating with police», that was implemented by the Association UMDPL. The main audience of master-classes were teenagers from 14 to 18 y.o. who are in conflict with the law or could have such experience (including a negative one) of communication with police. Such trainings were conducted for students of the following types of educational institutions: boarding schools, shelters, penitentiary institutions, centers for social and psychological rehabilitation of children, orphanages, social housing centers for minors and adolescents etc. Read more

In Berdyansk within the framework of the III All-Ukrainian Festival of Animation «Ravlyk-Fest» a series of animated films «You and Police» were presented. The purpose of the cartoons is to show senior high school students how to communicate with police within the framework of the law, teach them how to protect their rights and avoid becoming a victim of police arbitrariness. Read more 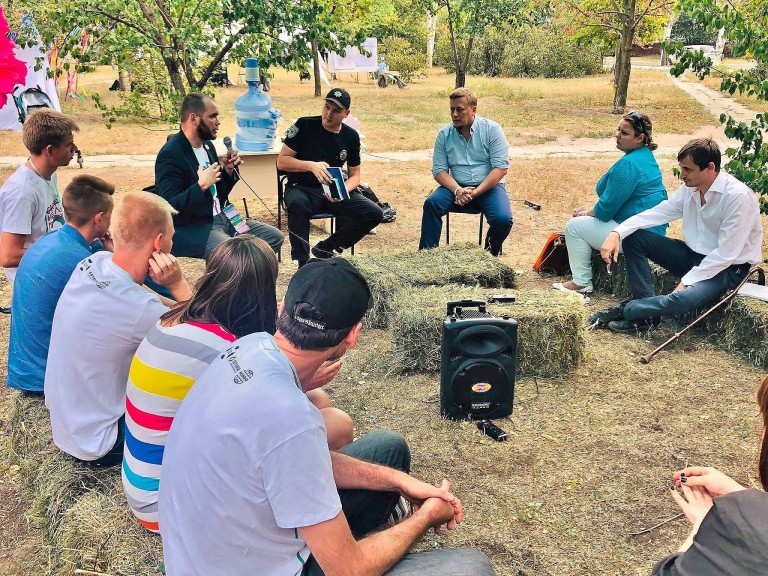 Most conflicts between people in the East happen when crossing the check-points, – human rights defenders

During the «Festival of Thoughts» that took place in September in Severodonetsk (Luhansk region), participants discussed the problems that arise when crossing check-points in the East of Ukraine between settlements located on the line of delimitation and non-government controlled areas. The speaker on the topic was Serhiy Pernikoza, coordinator of the monitoring campaign of the Association UMDPL and Eugene Vasylyev, human rights center «Postup». Read more 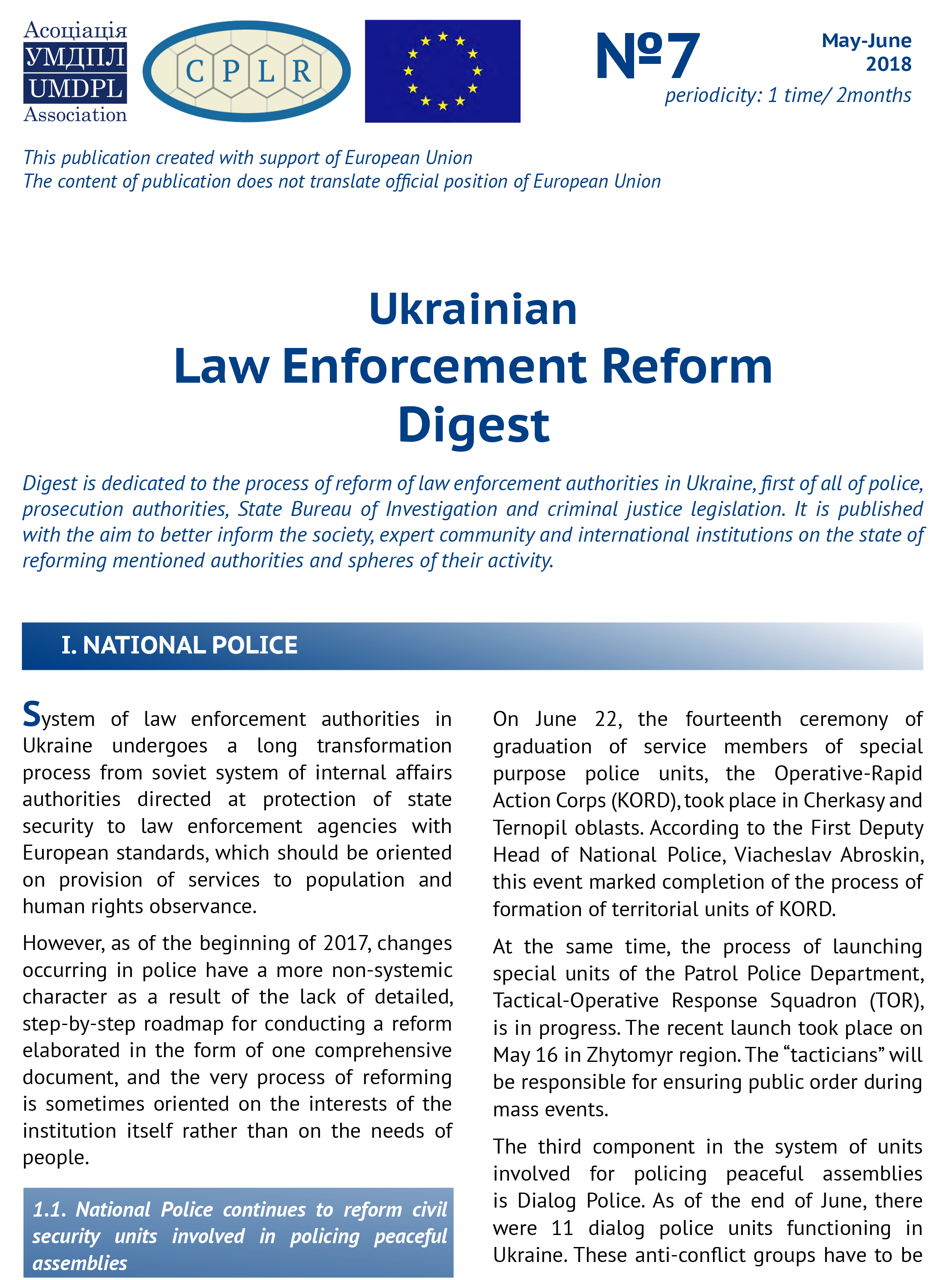 Every two months we prepare the informational bulletin about the reform of law enforcement authorities in Ukraine. Its 7th issue includes the following:

Read and download the bulletin in Ukrainian and English languages.

Department of the National Police of Ukraine in Ternopil region is the most transparent in Ukraine, – research 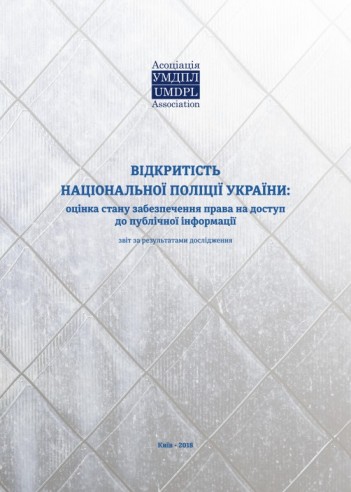 Based on the results of monitoring institutions of the National Police of Ukraine all over the country, which took place from April to December 2017 and covered 151 institutions, Main Department of the National Police of Ukraine in Ternopil region received 60,8% in the general rating of evaluation of the state of observance of the right to access public information. Second and third places in the rating, accordingly, received the departments in Vinnitsia and Volyn regions. Read more

You can download the analytical report «Transparency of the National Police in Issues of Access to Public Information» in the format of PDF. 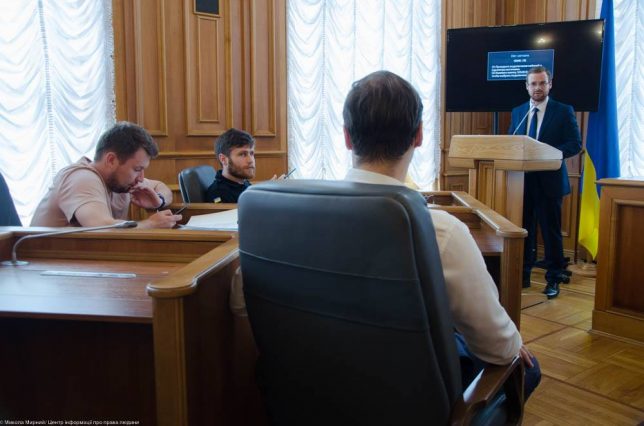 Comments of Eugene Krapyvin regarding the State Bureau of Investigations:

Civil formations on public order: report during the human rights conference of OSCE

From 10 to 21 September in Warsaw (Poland) the annual OSCE Human Dimension Implementation Meeting 2018 took place. Among its participants were members of our organization: executive director of the Association UMDPL Vadym Pyvovarov as well as experts Eugene Krapyvin and Mykhailo Kamenev. Read more

On 12 September Eugene Krapyvin and Mykhailo Kamenev delivered a report «Civil formations on public order in Ukraine: tendencies and threats to human rights and freedoms»

and presented the analytical report-overview of activity of civil formations on public order for the last four years after the Revolution of Dignity in Ukraine (2014), as well as of other institutionalized forms of engagement of citizens to performing police functions.

Read the report in Russian and English languages.

On 17 September, during the conference, experts of new initiative ZERO Torture, a coalition which the Association UMDPL is a member of, discussed tortures in Ukraine and their scale, successful and bad practices, specific risks existing on the occupied territories and what Ukraine does or could have done to fight tortures. Eugene Krapyvin took part in the discussion. Read more

On 19 September in Kharkiv took place an expert discussion of the work of police commissions. There was also a report presented based on the results of the research «Police Commissions in Ukraine», which was made with participation of the experts of UPLAN. 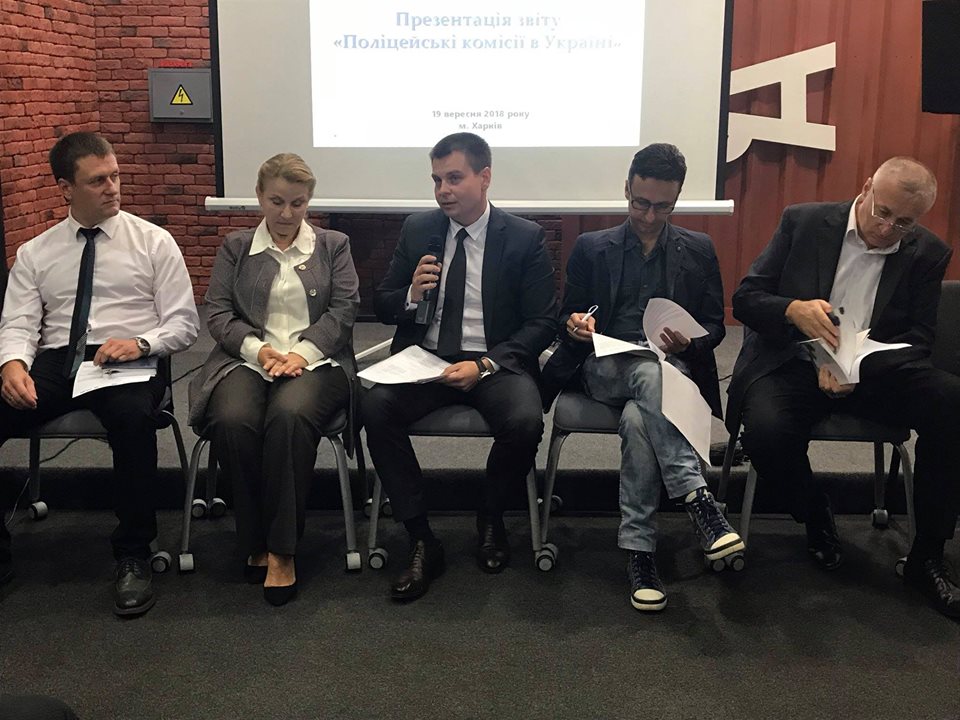 Authors of the research presented recommendations regarding staffing policy of police commissions.  Eugene Krapyvin and Yuriy Chumak took part in the discussion of conclusions and recommendations from the report. The research was conducted in the second half of 2017 – first quarter of 2018 by the group of experts of Centre of Policy and Legal Reform and the Association UMDPL, as well as with the help of partner organizations in the regions of Ukraine. Researchers applied common scientific methods, in particular analysis of the legislation, comprehensive semi-structured interviews with members of police commissions, collection and analysis of judicial practices on appeals against decisions of commissions etc.

Report on the results of the research includes the information about members of commissions, problems of legislative regulation of their activity, judicial practice of appealing against decisions of commissions and other elements of this mechanism of participation of civil society in control of police. Read more and Get the report by the following link.

Watch the video of expert discussion

Comments of experts regarding reform of police:

On 2 July experts of the Association UMDPL Eugene Krapyvin and Mykhailo Kamenev took part in the round-table «Criminalization of illegal enrichment – challenges and perspectives». The event was organized by the EU Anti-Corruption Initiative and Anticorruption Committee of the Parliament. Read more

On 29 August Eugene Krapyvin delivered a lecture on police and human rights for youth within the framework of international exchange program organized by European play work association (E.P.A.). Among participants of the lecture were nearly 60 students from Germany, Romania, Great Britain, Russia and Ukraine. Read more

Will the Supreme Anti-Corruption Court really be fair?

Anti-corruption court will have 39 judges but will their work help in combating corruption? In her blog on LB.ua Ms. Olena Ostrovska, Head of the program «Justice in Criminal Justice» of the Association UMDPL, writes what an ordinary Ukrainian citizen has to know about the new court. Read more 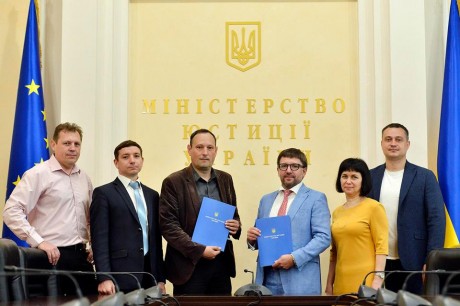 On 2 July there was a presentation about concluding a Memorandum of Cooperation between the non-governmental organization «Association of Ukrainian Human Rights Monitors on Law Enforcement» and the Ministry of Justice of Ukraine regarding prevention of human rights violations in penitentiary institutions. The document was signed on 27 June. On behalf of the Association UMDPL the Memorandum was signed by the executive director Vadym Pyvovarov and the Head of Penitentiary Program Olexander Fedoruk, and on behalf of the Ministry – by Deputy Minister of Justice Denys Chernyshov. 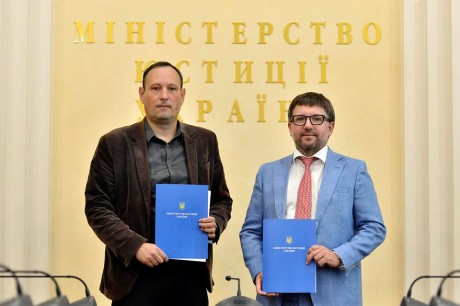 The objective of the Memorandum is to consolidate efforts of parties aimed to identify joint vision in order to improve mechanisms of protection of interests of persons, society and state as well as to prevent human rights violations in penitentiary institutions, pre-trial detention centers of the State Criminal and Execution Service of Ukraine. The Memorandum is concluded for the term of one year. Read more 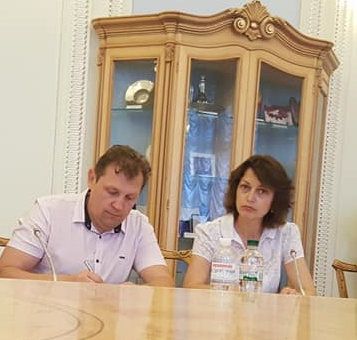 Based on the results of the discussion during the 22nd meeting of the working group of the Committee on Legislative Support of Law Enforcement of the Verkhovna Rada of Ukraine and the Ministry of Justice of Ukraine on reforming the penitentiary system, that took place on 5 July, a draft law on regulation of the legal status of persons who served sentences on the temporary occupied territories was submitted to the Parliament. The document was elaborated with participation of experts of the Association UMDPL Olexander Fedoruk, head of the penitentiary program, and Olena Ostrovska, head of the program «Justice in the Criminal Justice». Read more 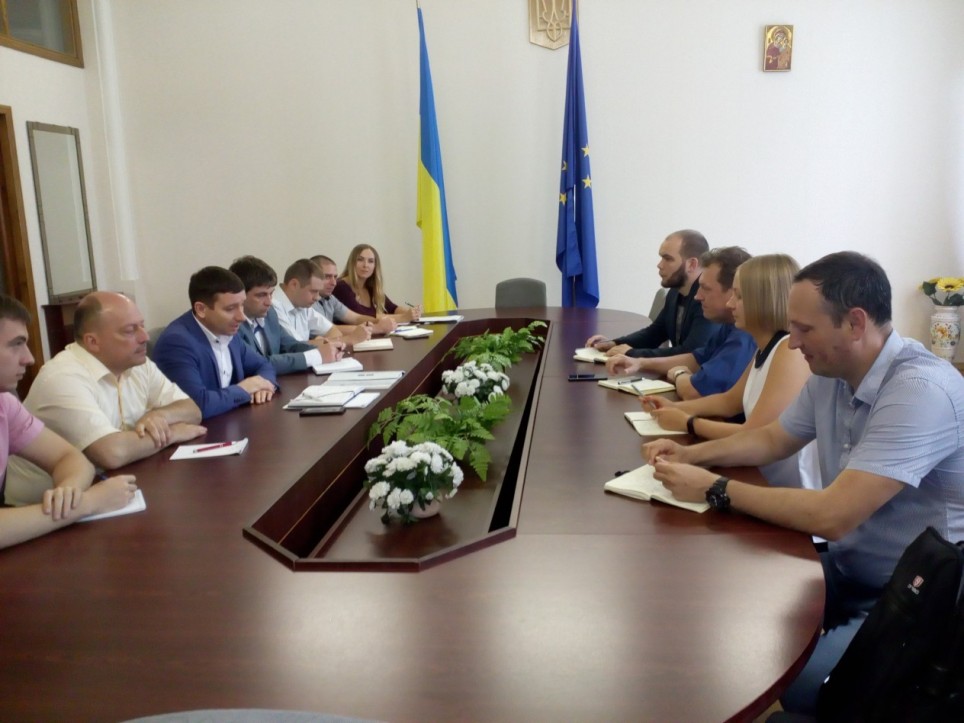 On 26 July, during the working meeting of the experts of the Association UMDPL and the Department of Penitentiary Inspections of the Ministry of Justice of Ukraine, discussed were the general terms of reference for inspections of penitentiary institutions and pre-trial detention centers of the State Criminal and Execution Service of Ukraine. Based on the results of the meeting, further steps were identified to conduct joint inspections of penitentiary institutions and expert work with relative legislative framework. Read more

Updated Rules of Internal Order are adopted for penitentiary institutions

Ministry of Justice of Ukraine has recently adopted the new text of the Rules of Internal Order of Penitentiary Institutions. The document was adopted pursuant to amendments of the national legislation and with the aim to bring the Rules in correspondence with the requirements of international legal acts on human rights, reads the release of the Ministry. Read more 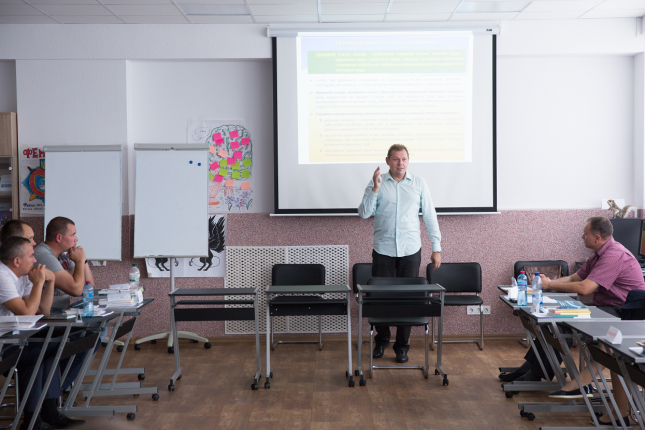 On 11 September Olexander Fedoruk, head of the Penitentiary Program of the Association UMDPL, delivered a speech during the two-weeks skills improvement course for officers of the penitentiary system within the framework of the program «Effective Penitentiary Management», which was conducted in the Bila Tserkva Training Center of State Criminal and Execution Service of Ukraine. 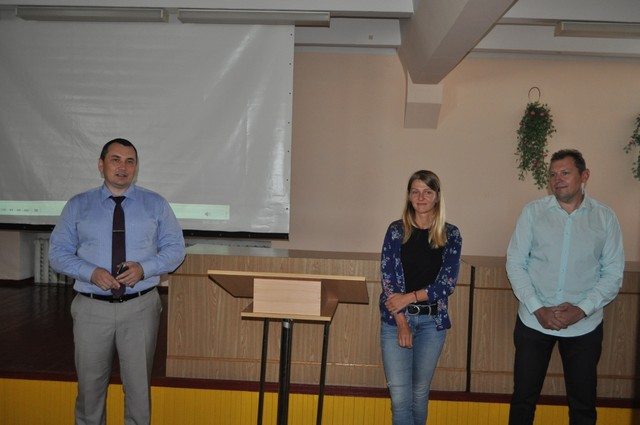 Expert presented interesting materials regarding main spheres of activities of the Association UMDPL, namely peculiarities of taking preventive measures on human rights observance in the penitentiary institutions by raising civil activity and motivation of personnel of institutions to respect human dignity. Participants of the course also had a chance to watch the documentary film of RealStories studio «ПЖ», that is called to draw attention of civil society to the problems of people serving life sentences in places of detention. Read more

Olexander Fedoruk, head of the Penitentiary Program of the Association UMDPL, took part in the discussion of problems with the penitentiary system in the program «Crime» on the TV-channel «Pryamyi». You can listen to Oleander’s comments on minutes 9, 25 and 42. Watch a video

On 9 July Association UMDPL together with the Center of Human Rights Information and NGO «Ukraine without Tortures» held an open discussion on the topic: «Who and why is being tortured in Ukraine». Participants of the event discussed the situation in places of detention, tolerance to violence, general tendency of impunity as well as the ways to combat tortures in Ukraine. Read more

How do police units function in the East of Ukraine, – monitoring by human rights defenders 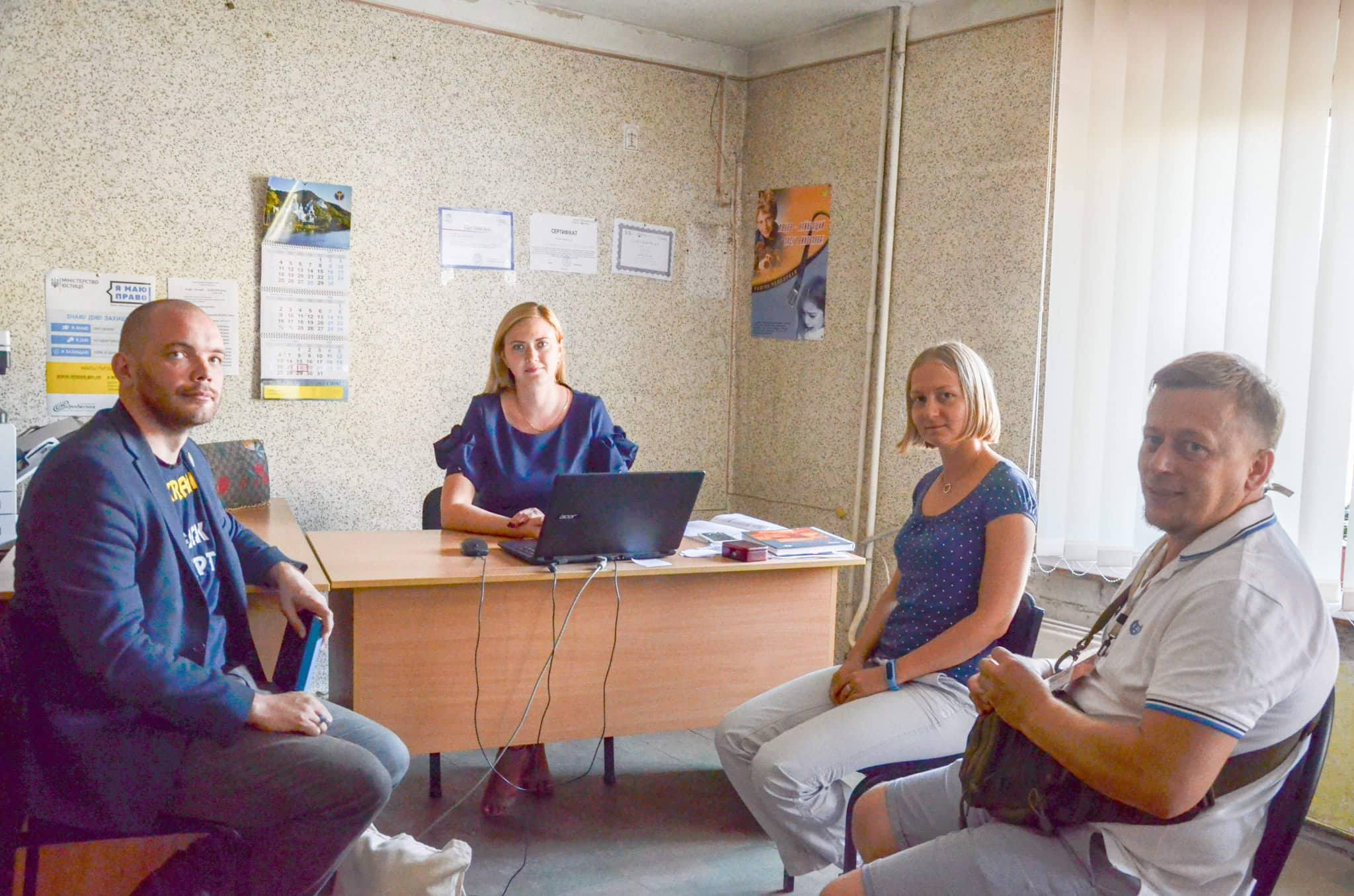 In August representatives of the Association UMDPL and the Human Rights Center «Postup» monitored police units in Donetsk and Luhansk regions for observance of human rights by law enforcement authorities. Preconditions for such a monitoring became numerous appeals filed through the 24/7 hotline against police officers. 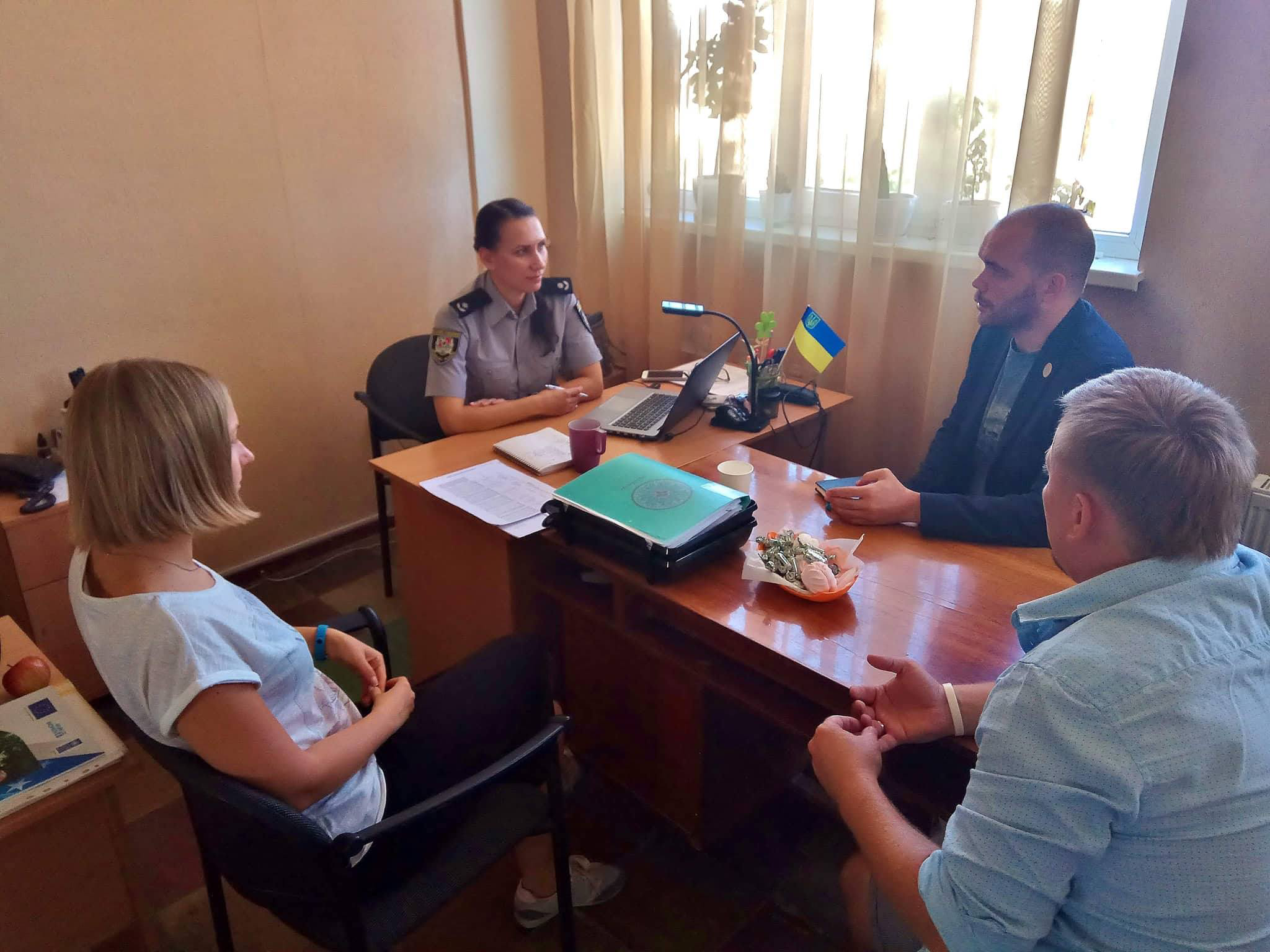 For three days the monitoring group visited five settlements, in particular: towns of Girske, Kreminna (Luhansk region), Druzhkivka, Slovyansk, Lyman (Donetsk region), where they held a number of meetings with leadership and officers of police units and prosecutor’s offices. A big amount of time was dedicated to conversations with appellants to clarify the circumstances that led to complaints. Besides that, human rights defenders had meetings with representatives of legal aid bureaus during which they could discuss details of trainings for police officers on standards of detention, including regarding the order and time for calling a lawyer. Read more 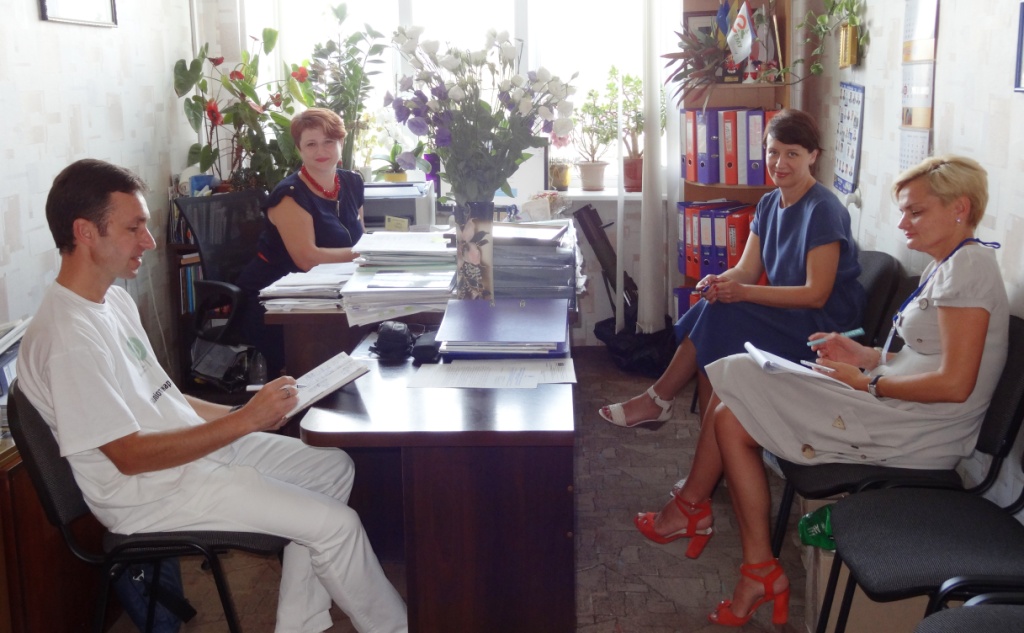 On 23 July 2018 there was a working meeting of representatives of executive authorities of Chuguiv City Council with the head of Kharkiv Regional Center of the Association UMDPL Yuriy Chumak. Participants discussed how local authorities work on creation of comfortable and accessible conditions for city residents to receive quality administrative and municipal services. Read more