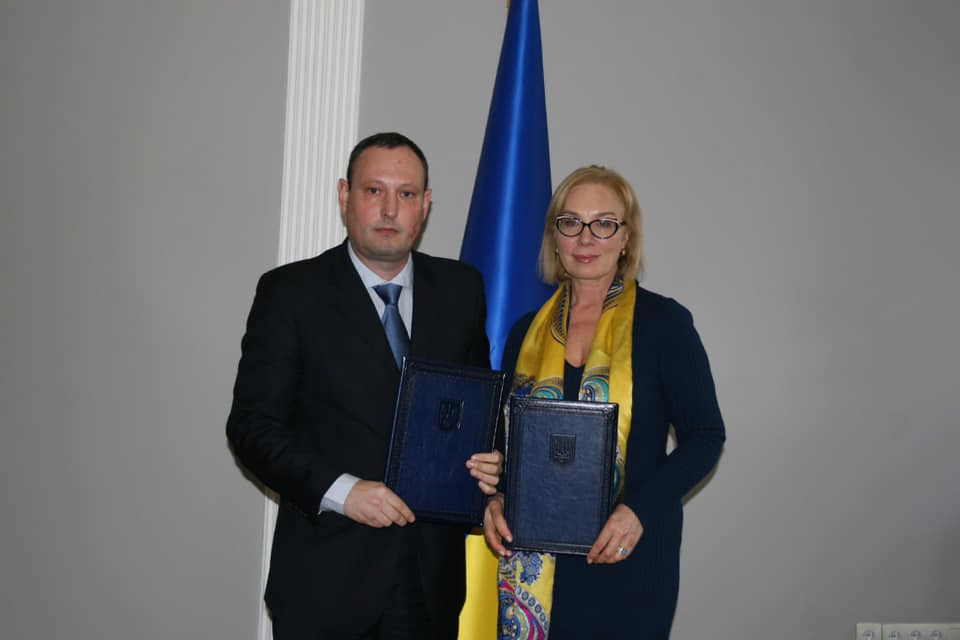 On 19 February Executive Director of the Association UMDPL Mr. Vadym Pyvovarov and Ukrainian Parliament Commissioner for Human Rights Ms. Liudmyla Denysova signed a Memorandum of Cooperation. The Memorandum aims to improve general situation with observance of human rights and fundamental freedoms as well as to facilitate legal awareness of population. As part of the joint work within the framework of the Memorandum it is also foreseen to conduct monitoring visits to places of detention, study and generalize information about detected human rights and freedoms violations. Apart from that, Secretariat of the Ukrainian Parliament Commissioner for Human Rights together with the NGO will conduct monitoring of the state of observance of human rights in the sphere of access to information and personal data protection, as well as evaluate decisions of local authorities for observance of constitutional rights and freedoms of a person and a citizen. Memorandum also foresees development of Commissioner’s network of pro bono regional coordinators on public relations.

“Pravopil” now has a City Council and Center of Administrative Cervices

In Kyiv there was a working meeting in the format of presentation of new objects – 3D-offices of a City Council and Center of Administrative Services in the virtual city “Pravopil”. Participants were not only able to check their technical and legal characteristics but could also ask questions and introduce changes to optimize the process. Read more

Oksana Poluliakh, manager of educational and awareness raising projects of the Association UMDPL, talked about the benefits of a virtual city “Pravopil” for monitors of the National Preventive Mechanism during the educational training on monitoring places of detention. The event took place on 20-23 February in the Educational Human Rights House Chernihiv. Read more 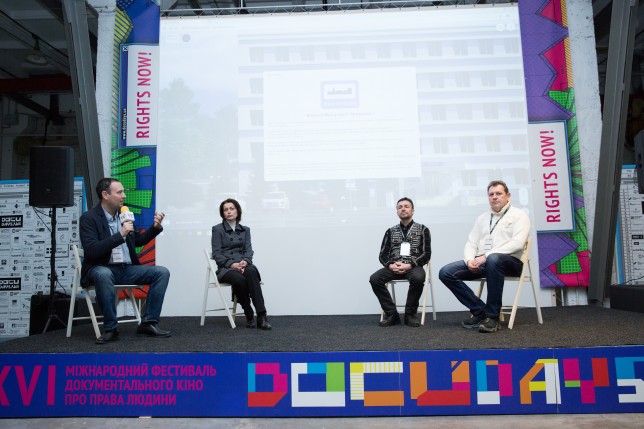 On 23 March within the framework of Docudays-2019 there was a presentation of a virtual legal city “Pravopil” pravopil.umdpl.info. Besides the general presentation of objects and instruments, included in “Pravopil”, human rights defenders and representatives of state authorities talked in detail about the problems with human rights observance in the activity of state authorities. Read more

On 25 March in the studio of radio “Holos Stolytsi” the Head of the Penitentiary Program of the Association UMDPL Mr. Olexander Fedoruk and Head of the Program “Justice in Criminal Justice” Ms. Olena Ostrovska told about the virtual legal city “Pravopil”. Watch and listen to the program

To youth about police

On 5 February in Volyn Youth Center there was a meeting of youth with a human rights defender, expert of the Association UMDPL Mr. Sergiy Pernikoza. During the meeting its participants learned how to behave with police during their check-up of IDs, what to do when you are stopped on the street and taken to a police station etc. Link to event

This is what the “Training for Organizers of Informational Events with the Aim to Decrease the Level of Stigmatization and Discrimination against Sex-Workers by Police Officers” was about. It was conducted by the Association UMDPL together with the Charitable Organization “LEGALIFE-UKRAINE”. Read more

Representatives of the expertise and analytics program of the Association UMDPL, lawyers Mykhailo Kamenev and Stepan Zolotar emphasize on the fact that the document has outdated unconstitutional provisions and regulates activity of militia that stopped existing after creation of the National Police of Ukraine in 2015. Experts addressed Mr. Mustafa Nayyem, member of Ukrainian Parliament, who then submitted a deputy’s appeal to the Ministry of Justice of Ukraine regarding the cancelation of the state registration of the above-mentioned decree of the Ministry of Internal Affairs of Ukraine. Read more

Research “Disciplinary Responsibility of Prosecutors in Ukraine” was presented 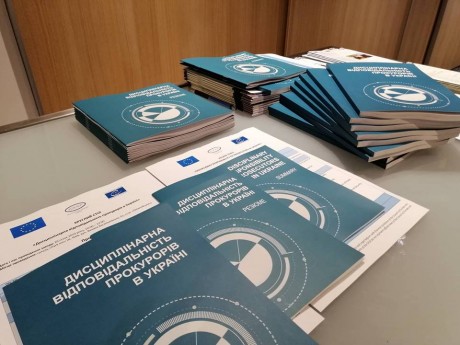 On 23 January in the city of Kharkiv experts of the Association UMDPL Mr. Eugene Krapyvin and Mykhailo Kamenev took part in the discussion, dedicated to civilian formations on public security and challenges the state faces in their regard. Read more

How to file a complaint against a prosecutor: trainings conducted in Dnipro and Lviv

On 1 March in Dnipro and 22 March in Lviv, during seminars for lawyers and civil activists “How to file a complaint against a prosecutor to the Qualification and Disciplinary Commission of Prosecutors”, expert of the Association UMDPL, lawyer Eugene Krapyvin talked about the procedure for consideration of cases by the mentioned commission. Read more

Mykhailo Kamenev: Human rights observance – this is, first of all, public security

Expert of the Association UMDPL, lawyer Mykhailo Kamenev took part in the Conference of the Institute for Peace and Reconciliation “Safe Community” and told about human rights and freedoms observance as an important component of community security. Read more

On 28 March Mr. Mykhailo Kamenev, a lawyer and expert of the Association UMDPL participated in the press-briefing in the Ukrainian Crisis Media Center. Read more and watch a video of the briefing 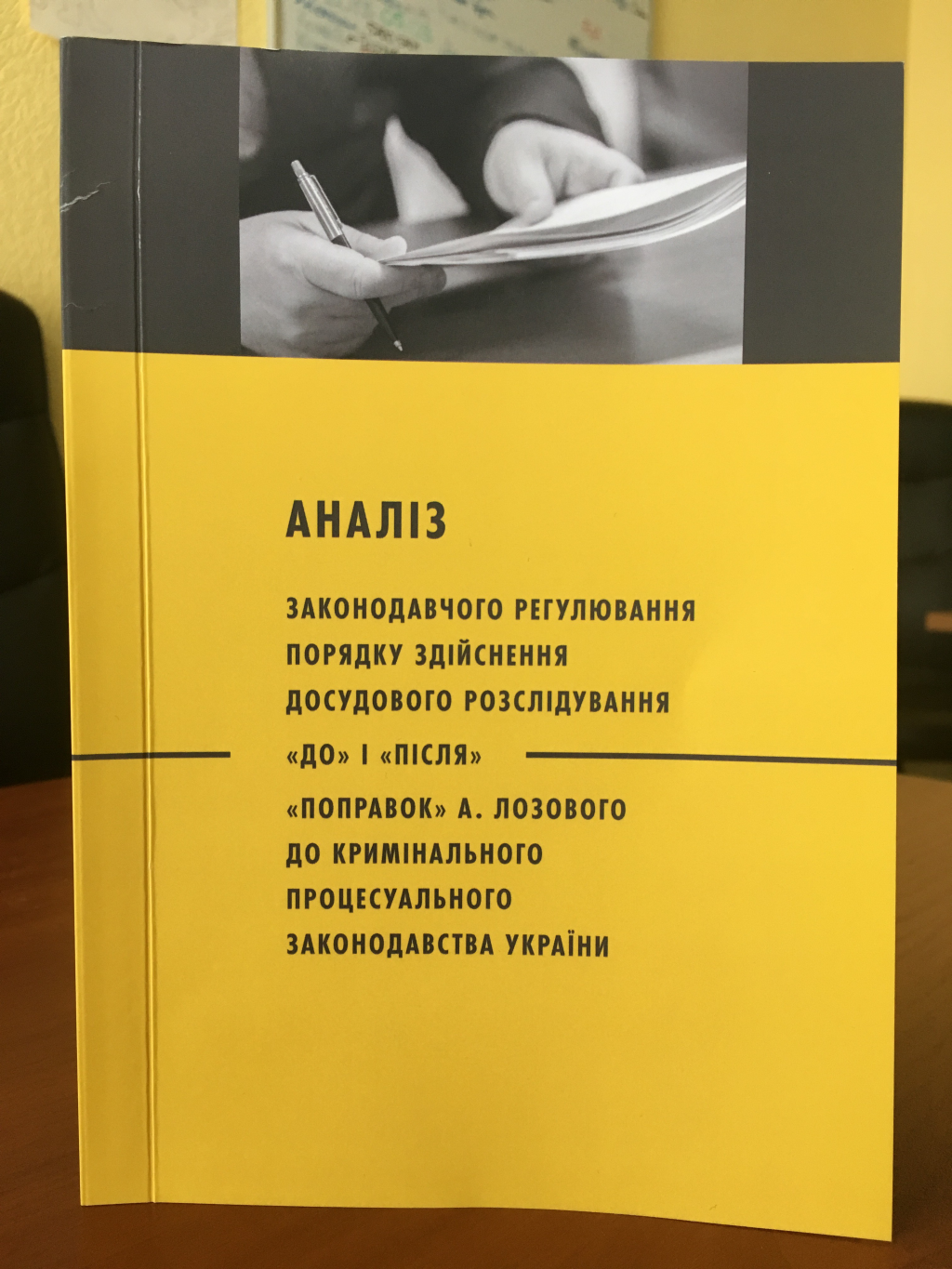 On 21 February Board of Public Control of the National Anti-Corruption Bureau of Ukraine presented the expert research about how the so called “Lozoviy’s amendments” affected the activity of law enforcement authorities, including the National Anti-Corruption Bureau of Ukraine in 2018. Among authors of the research was a lawyer, expert of the Association UMDPL Mr. Eugene Krapyvin. Read more

What changed in reform of law enforcement authorities in the end of 2018: digest. Read more

What changed in the criminal law and the procedure in the beginning of 2019? Read more

What to do when detained and the new model of driver’s license issuance: news digest for January. Read more

During the first quarter of 2019 experts provided over 70 comments, among which are:

On 11 January a Law introducing amendments to the legislation on prevention of violence against women and domestic violence came into force. Experts told about what it essentially changes. Read more

Comments of Eugene Krapyvin regarding the mandate of police officers to take actions in order to prevent and combat domestic violence. Read more

Withdrawn arrest of property of the ex-Minister of the Ministry of Internal Affairs of Ukraine Mr. Zakharchenko: comments of the lawyer Eugene Krapyvin. Read more

Why identification of law enforcement officers is important, – comments of the expert Mykhailo Kamenev. Read more

Two years of work of the Head of the National Police: experts evaluated Mr. Knyazev

Lawyers, experts of the Association UMDPL Eugene Krapyvin and Mykhailo Kamenev provided comments to the TV company “Magnolia-TV” regarding changes that have taken place during two years of activity of the National Police of Ukraine under the leadership of Sergiy Kniazev. Read more

Security Service of Ukraine functionally overlaps with the National Police of Ukraine instead of taking care of national security, – comments of Mykhailo Kamenev. Read more

Reform of the Ministry of Internal Affairs and the Scandinavian model: comments of a lawyer

Eugene Krapyvin commented to “Slovo I Dilo” regarding demands of the demonstration “Rise, Bandera”, which took place on 18 February near the Ministry of Internal Affairs of Ukraine, among which were: reform of law enforcement system and introduction of the so-called Scandinavian model. Read more

What’s next with illegal enrichment: draft laws – analysis of Eugene Krapyvin on the website of the Association UMDPL by the links here and here; in the studio of Hromadske radio (“Defendants in 65 proceedings of the National Anti-Corruption Bureau of Ukraine regarding illegal enrichment have already de-facto avoided responsibility”.

“You see a problem – solve it”: coordinator of monitoring campaigns of the Association UMDPL Sergiy Pernikoza evaluated the state of police reforms in the program of “Hromadske.Volyn”. Read more

“It is on”: National Corps against Poroshenko, Lutsenko and corruption in defense sector, scandalous Eurovision – Mykhailo Kamenev in the studio of Hromadske TV.

Posts in blogs and articles for publications

Disciplinary responsibility of prosecutors: what has changed for 1,5 years – Eugene Krapyvin in the blog for publication “Liviy Bereg”. Read more

Arrests for “unauthorized” street protests. When will it finally stop? – Mykhailo Kamenev in the blog for publication “Liviy Bereg”. Read more

How to evaluate the work of the State Bureau of Investigations? Report for 2018 – Eugene Krapyvin in the blog for publication “Liviy Bereg”. Read more

Youth councils under state authorities: Komsomol or the new elite of the nation? – Stepan Zolotar in the blog for publication “Liviy Bereg”. Read more

Face-lift of public councils, or How to (not) change rules of the game – Stepan Zolotar in the column article for Ukrainian Pravda. Read more

Arrests for “unauthorized” street protests. When will it finally stop? – Mykhailo Kamenev in the blog for publication “Liviy Bereg” analyses how it happened that a modern Ukraine still has an archaic provision in article 185-1 of the Code of Ukraine on Administrative Offences, why it should be changed and how this problem can be solved. Read more

“Dark” side of judicial reform – story of Olena Ostrovska in the article for “Dzerkalo Tyzhnya”. Read more

Why legal education needs to be reformed: upon results of discussions

On 25 January Ms. Olena Ostrovska, Head of the Program “Justice in Criminal Justice”, took part in discussions of the report upon results of analytical research “Knowledge and Skills of Law Schools and Higher Educational Institutions Graduates through the Prism of Demands of Labour Market”. Read more

On 13 February Olena Ostrovska participated in the event organized by the Ministry of Justice of Ukraine dedicated to “Development of the System of Justice and Resocialization of Children in Conflict with the Law of Ukraine”. Read more 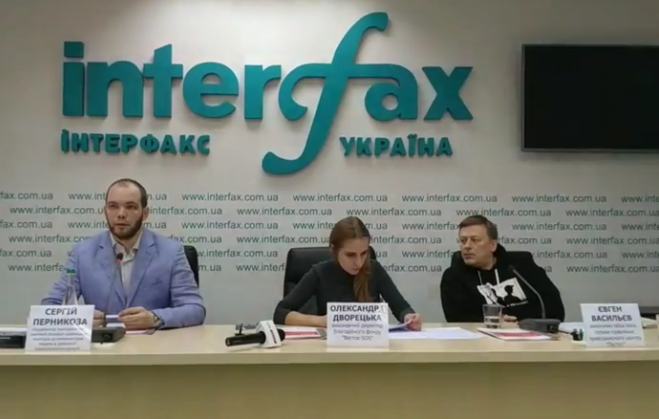 On 27 February there was a presentation of results of the work of the hotline for detection of cases of illegal actions of Ukrainian law enforcement officers in Donetsk and Luhansk regions for 9 months of 2018. The hotline organized by the human rights center “Postup” has been working in the East of Ukraine since 2018. During this period, they received 453 complaints from citizens on illegal actions of law enforcement structures in the Joint Forces Operation zone. Read more and watch a video of the press-conference

A new model of taking driver’s license exams was presented 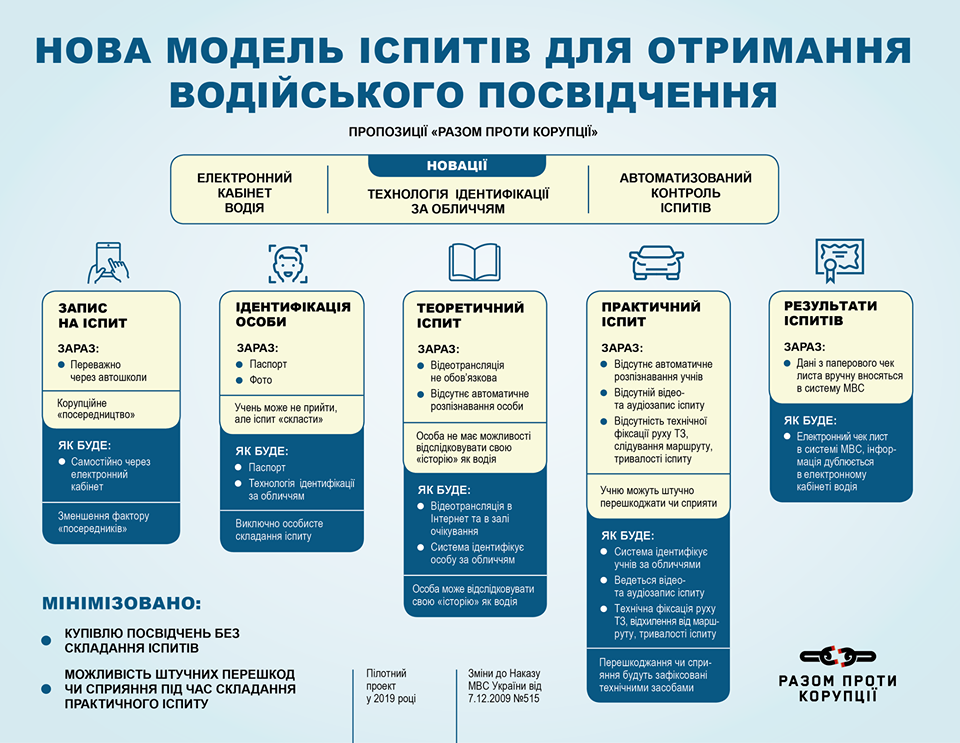 Protection of rights of sex-workers and what police has to do with it, – demonstration

On 1 March, near the building of the Ministry of Internal Affairs of Ukraine there was a demonstration “The Law foresees – we demand!” for protection of rights of sex-workers. Read more

A documentary film “The Job” of the film director Kseniya Kravtsova received an award as the Best Short Documentary during the Prague Film Awards 2019, which took place on 11-12 January in the capital of Czech Republic.

The film tells the story of three Ukrainian sex-workers, their life choice to work in the sex services industry. Read more

On 13 March in the House of Cinema there was a presentation of documentary films “ПЖ” and “The Job”. Both have been presented during 2018 in different international festivals and, upon numerous requests, will again be shown to viewers in Kyiv. Link to an event